Church of the Good Shepherd Kids See Shrek The Musical

Church of the Good Shepherd Kids See Shrek The Musical. 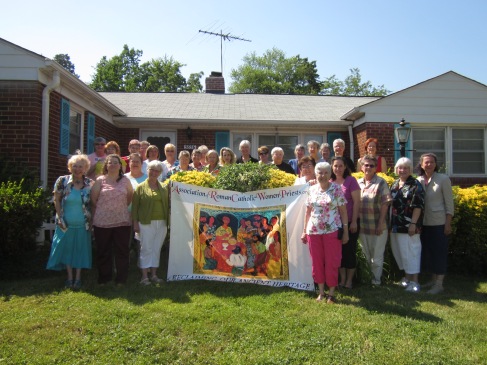 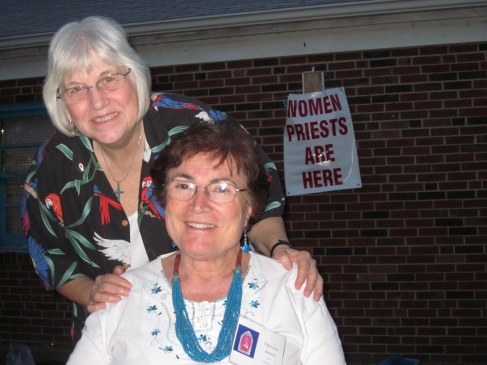 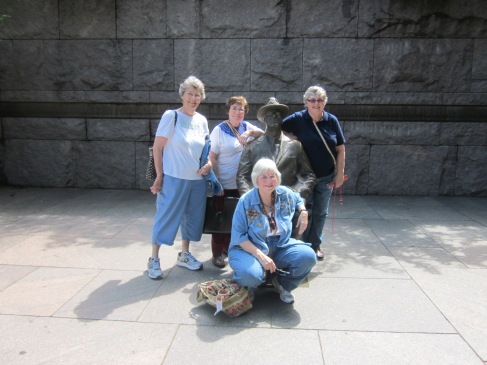 Roman Catholic woman priest Olga Lucia Alvarez traveled from Colombia,South America to join twenty eight other members of ARCWP for their Annual Meeting and the ordination of five women in Falls church ,Virginia. The women came from all over the United States. Michele Birch-Conery, another international member came from British Columbia, Canada. The meeting was led by Dorothy Shugrue, of Connecticut, the Circle Leader. After electing Board Officers and welcoming new Board members, the large group broke into small groups and considered a series of Scriptural and theological questions related to call and justice and peace,the charism of ARCWP.   The reflection was deep and the participation was full and enthusiastic. Olga Lucia challenged us to share our ministry with the poor and the outcast. Her ministry in Bogota and the Good Shepherd ministry of Judy Beaumont and Judy Lee in Fort Myers, Florida are two examples of justice oriented ministry. Judy Lee and Olga Lucia talked about the place of doubt and anger in developing the kind of love and compassion needed in service with the poor, especially in affluent countries.  Janice Sevre-Dusynska attended two protests against Drone warfare and for peace during her time in the D.C. area. Her activism is an example of ministry risked for peace.

While in the D.C. area, priests Olga Lucia, Judy Beaumont, Judy Lee and Dotty Shugrue visited the Martin Luther King, Jr. and Franklin D. Roosevelt Memorials.  These were profound meditations on the power and wisdom of gifted leaders in the fight for economic, social and racial justice. Olga Lucia reflected on hatred and the violence in Colombia and the violence in America as she visited the King Memorial and the graves of John F. Kennedy and Robert Kennedy.  We reflected on the difficulty of justice oriented ministries and the challenge of living Matthew 25:31-46 and Luke 4:16-20 ministries. Throughout our time together it was affirming to be with those who share the charism and the charge of enacting peace and justice as we seek to love our neighbors as ourselves. 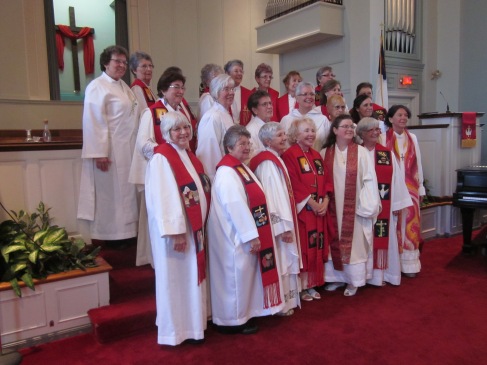 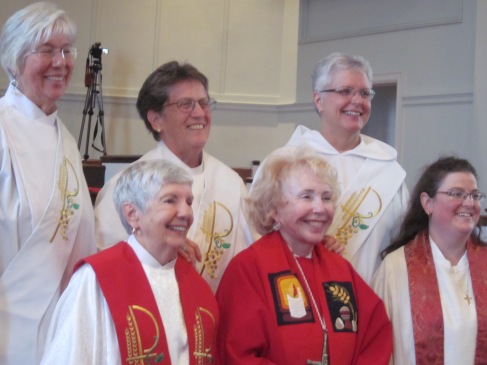 Joleane Presley, 40 of Virginia and Barbara Duff of Georgia were ordained Roman Catholic women priests. Marianne T. Smyth of Maryland and Mary Therese Streck of New York and Mary Collingwood of Ohio were ordained Deacons. You can see their joy in the photos above. The joy of their sister priests and deacons in ARCWP is also apparent in the picture of the group members able to attend this holy and joyful event. All blessings on the newly ordained and their ministries. 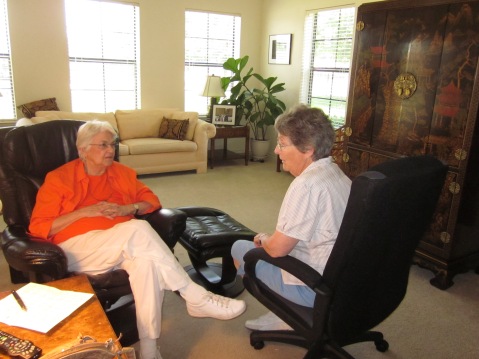 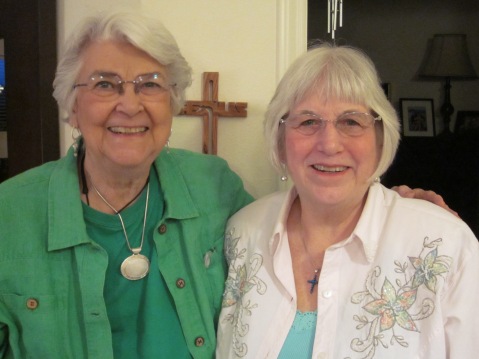 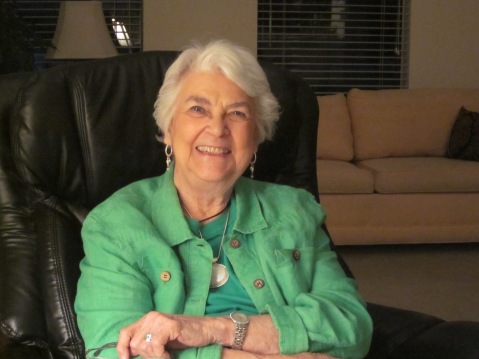 Rev. Dr. Adele Decker Jones is no usual octogenarian.  On 9/10/11 at age 84 she was ordained a Roman Catholic Woman Priest with the Association of Roman Catholic Women Priests.  Her ordination is valid as it is in a line of apostolic succession continued when a male bishop in good standing with the Pope ordained women bishops in Europe in 2003  to ordain other women.  The name of this male bishop is known and will be revealed upon his death. But in accepting Holy Orders Adele is breaking Canon Law 1024 that states only males can be ordained. The penalty is “automatic excommunication ” from the Roman Church,the church she has loved since early childhood. Rev. Dr. Jones, like other women priests, does not accept that anything or anyone can separate her from the love of Christ but this does not make the penalties of ostracism any the less difficult.

What kind of “elderly woman” chooses such a difficult road? Where does she get her conviction and her courage?  Where does she get her strength? At a time of life when many of her Catholic peers are picking out peaceful plots in sacred ground, a Roman Catholic Cemetery, Adele is finding joy in prophetic obedience to the God she has served all of her long life.  She is finding a way to bloom where she is planted now,in a retirement home in San Antonio, Texas where she has lived since 2009. She is a quiet presence, sought out without any level of self advertisement as she does not want to offend anyone. A tall and beautiful woman who looks younger than her 86 years with silver white hair that reflects like a halo, staff members and residents alike call her Dr. Jones and seek her counsel and prayers for their lives. Her unassuming but clear priestly presence makes a difference to all who know her.

She risked the wrath of the Roman Catholic Church when in 2008 the church compared women’s ordination to pedophilia, as the same genre of mortal sin.  When she learned of this comparison she was incensed and decided to find the women priests that the church now condemned and find out if she could become one of them.

When she found the website at ARCWP.org and called Bridget Mary Meehan,  the ARCWP Bishop, she found that there was no upper age limit.   What was important was her call to serve as a priest and her preparation. Adele is extraordinarily well prepared.  She has had a full career as a psychiatric nurse and counselor.  She has a Masters in Theological Studies earned in 1988 at the Oblate School of Theology in Texas. She also has a MDiv from the Oblate School earned in 1991. At that time Protestant denominations encouraged her to become ordained with them, but she wanted to remain a Roman Catholic. She reflects that it was very hard to get into the MDiv program as the archbishop had to approve. She refused to promise him that she would never seek ordination, but said that she could never agree to the Archbishop running every aspect of her life at any rate! They agreed that it was unlikely that she would be able to become a priest in her lifetime. With that understanding, having excelled on her entrance exams, she was admitted to study and was the fourth woman who graduated from the Oblate School of Theology in 90 years with a MDiv degree. In 1997 she graduated from Garret  Theological School of Northwestern University with a Doctor of Ministry Degree.  This completed her professional preparation for pastoral counseling and for the priesthood as the MDiv is the same as the preparation taken by the male priests. Many young Franciscans were in the MDiv program with her and it was then she realized her own bent toward Franciscan spirituality. She became a Third Order Franciscan and entered the Fraternity with her male Seminarian friends. They also assured her that they welcomed women’s ordination in the Church.   She describes this experience with the Franciscans as an experience of grace.

She notes that St. Francis’ charism was joy. As she looks back on her life she realized that there were many times in her life when grief and sadness might have overwhelmed her: but she chose joy instead. While she was in utero her mother experienced the death of her mother, Adele’s grandmother. Adele was aware of her mother’s deep grief, yet her mother, also a Nurse and a devout Catholic worked hard so that Adele would experience the joy of her family and the strength of the women who were her legacy. The family also struggled with the Great Depression and economic hardship as they struggled to put grief in its place and find the joy in life.

Adele loved her father, a policeman, very much but was challenged by her parents’ divorce and her mother’s burden as a single Mom. She was also deeply effected by the death of her father when she was fifteen. Yet she chose to hold on to the joy that her father brought into the lives of herself and her younger brother. With help from her Aunts she was able to attend Catholic School from grade school through high school.  There she loved the nuns who shaped her life spiritually, first the Dominicans, then the Sisters of St. Vincent De Paul.  She learned to play the trumpet and earned a music scholarship to the Catholic High School.  There she learned to discern her calling. On her seventeenth birthday she entered nursing school perceiving service to the sick as her calling.

In 1947 she became a psychiatric nurse and also met and later married her husband Lloyd. In 1952 and 1965 her sons were born, Randy and Rick. They were and are the joy of her life, as are Randy’s children and grandchildren. Yet learning for Adele was also a great joy and she completed her AA in 1963 and her BA in 1976 at the University of Texas Victoria Campus.  The additional degrees were helpful as she faced a divorce,also in 1976 after almost 30 years of marriage. This caused much grief, but she was also able to move on alone and to choose joy once again.  In 1980 she moved to San Antonio and worked for the Chancery also hosting a program on Catholic Television.

As Adele faces the many adjustments of aging and health she does so without complaint or depression. Once again, she faces the inevitable set backs of life with prayer and with joy. She reflects that she identified with her Aunt Katy who was a red head with keen wit and a wonderful sense of humor. In her own life and in her career as a nurse and pastoral counselor she has been faced with both tragedy and comedy. It is a grace that she saw comedy where others could only see pain. Never once did she minimize the pain of others, but she sought to help them find ways to adapt and cope even in the midst of tragedy. And, she taught them to laugh wherever this was possible.

It is one who seeks joy where there is disappointment and grief that has the courage to choose to become a woman priest.  Adele notes that God has worked in dramatic ways in her life.  Opening the door to the priesthood to women in the Roman Catholic Women Priest Movement is one of those dramatic occurences. Rev. Dr. Jones says that all of the preparation she had academically and experientially came to a fulfillment in the unexpected grace of her ordination. Every moment of her life has led to this and every moment that she has left will be dedicated to serving quietly and modestly as a Roman Catholic Woman Priest . Another Priest, Judy Beaumont and I went to San Antonio to minister to Adele,our older sister priest. Instead she ministered to us and we came away immeasurably enriched, knowing that we had been in the holy presence of a woman of great wisdom, and joy.

Story as told to: 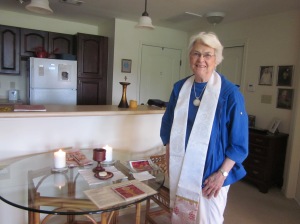 Co-Pastor with Judith Beaumont of 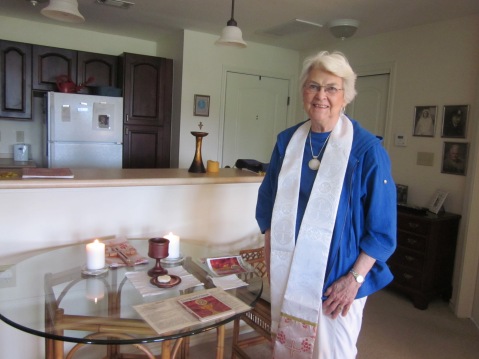