Shadowing our Women Priests on a Day of Pastoral Visits

This entry includes an update on Allan whom we visited again on 10 /18/13  and Shawn who we have been following.

Allan continues to do remarkably well. He is actively engaged in conversation with his visitors. His mind is excellent and witty.  He dealt with some medical issues but is feeling good now. The color on the TV remains great and he enjoys it.  He is also enjoying a Tablet that his daughter got for him though the wireless reception is frustrating. He had Pastor Judy Beaumont give a good try at bringing it in, but no luck yet. His daughter will check it out later. His sense of humor is good and his appetite is even better. He does not overdo, but is happy to have the McDonalds favorites we brought him and to order out from Papa Johns with other company. He enjoyed praying with us and looks forward to a next visit.

Shawn is feeling better after the initial pain from the extractions abated. He is coping with soft foods and shakes and had some requests for food that we will bring for him on Sunday. He is feeling much more hopeful and looks forward to a first fitting in two weeks. We agree that it will be so good to see his smile again.

Summary of the original article:

We began this day with a prayer for grace. As we prepared to visit Allan, who is fifty-six, in Hospice first, we prayed that we might know how to be there for him. We have known Allan since the beginning of our Church in the Park ministry in 2007. He was one who dropped in on his own schedule when we were outside and when we moved to Church in the House too in 2009. Tall and artistic he had painted houses and the fumes had taken its toll on his lungs even then,  Still it was a struggle to help him get SSI Disability as he hated going to Doctors. (Finally with lawyers he was successful and he was proud to own a little trailer of his own).  He is known for his Hawaiian shirts so we brought him one to drape over his bed along with a little bear bearing a heart that said I Love You.

Allan was in quiet reverie as his eyes fixed on the TV with a poor and faded picture. He looked up, focused and was so pleased to see us. He loved the bear and gave us a big smile. He liked it even better when we produced the trademark Hawaiian shirt and draped it over him. He began slowly to become animated and was happy to share that his son had come from California to see him and his ex-wife and step daughter were regular visitors along with his best friend, Dan. This meant so much to him.  He liked Hospice better than the hospital, and he was feeling comfortable. He was thankful for being comfortable and having people who care about him. He shared that in addition to the COPD, he also had cancer.  They “got it”  but he was unable to continue with radiation.  He became more and more animated as we talked. He even asked us to fix the TV picture so he could actually see it. We did and he was amazed at the brilliant colors.  He said that he still loves colors. This is Allan sporting his Hawaiian shirt.

When we asked Allan if he would like to be anointed he said “Oh, yes. My Grandma raised me in the church and I would like the rites.” The peace of our God be with you, Allan”. “And also with you” ,he replied. He also knew the reading from James: “Are there people sick among you: Let them send for the priests of the Church,and let the priests pray over them, anointing them with oil…” “That is why I called for you”, Allan interjected. He listened carefully at every word of the rite. My heart was moved as he offered his hands for the anointing as well. He joined Pastor Judy Beaumont and I in the prayer of Jesus and said every word with meaning.  He nodded his head and smiled when we shared the words of the prayer after anointing that end in “and when alone, assure him of the support of your holy people”. He said “That is good!” We assured Allan that we would come again and keep him in our prayers.  We ended with a prayer that he be surrounded by God’s love and protection and Allan said a big “Amen!” 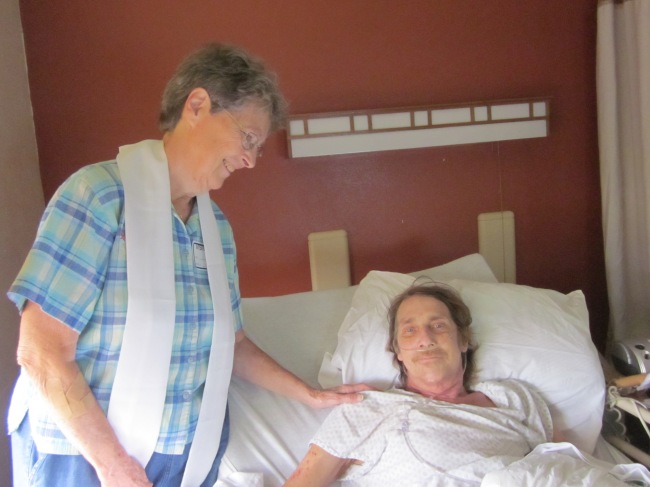 We were thankful that Allan was so well able to  respond and gain  strength from the healing Rite and our time together.

We then went to visit Mike who is also fifty-six and has COPD. We knew Mike from the beginning of our ministry with the homeless as well. He had lived in our transitional facility and was housed since 2009.  Mike was finally home after three life threatening hospitalizations. We had anointed him at the hospital. We were so glad to see him doing so much better and taking hold of life once again. This is Mike and one of his cats. His love for them motivates him. Our gift to Mike was cat food as well as cookies for himself. He is happy to be able to eat again. 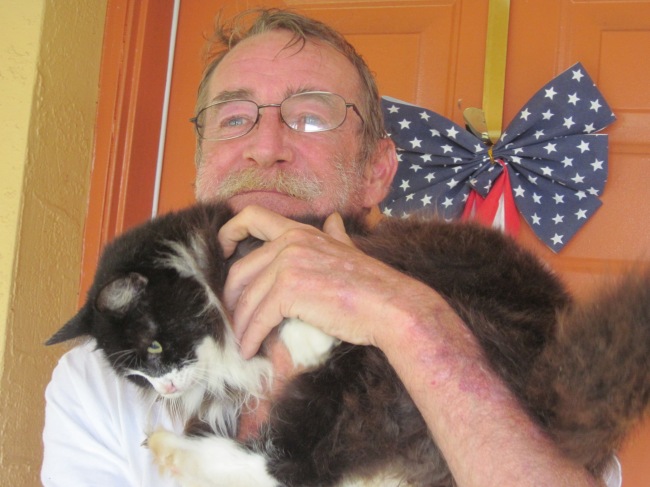 Mike is presently homebound and this is hard for him as he likes to go to church and he likes talking with people. He shared how much he enjoys visits from his friends who are ‘snowbirds’ and will return soon. We shared his health concerns, his recently successful battle with alcohol,his family joys and concerns, and his worries. We helped him fill out paperwork for rides to the Doctor’s office.We also shared his joys at getting better finally.  He was happy to be anointed and participated fully. He likes to pray and was at peace as we left. 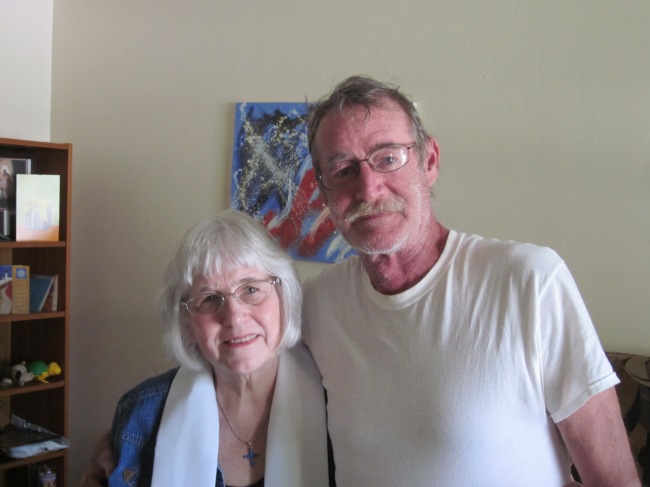 When we left Michael we met Len at the bus station to buy him a ticket home to another part of Florida. Len has been housed since March 2013 but has recently been struggling with mental health issues that pull him back to the streets. By the grace of God he is now ready to get help for those issues and to return home so he does not lose his housing. He will be going home on his fifty-seventh Birthday. He was thankful for the ticket and for a Birthday card and gifts.

Then we went to visit Shawn and his family. Shawn is a young adult,twenty-two years old, that we knew from our pastoral work before we started the Church. There are now sixteen members of his family that now attend our church as he does. We visited him as,due to gum disease, he is going to have all of his teeth pulled tomorrow and he felt frightened and depressed. As he had trouble eating and felt weak, we also brought him an MD prescribed protein shake and blender so he could survive without chewing.  He had shared his lowering self esteem because of the removal of his teeth as a major source of depression.  We gave him a beautiful new shirt to wear as he felt better and his family told him how handsome he would look in it. This brought the first smiles in days. We prayed with him and promised to be with him throughout this trial.

We then enjoyed some play time with his younger cousins who also attend our church.

Fortified by the love of this wonderful family, we then visited two more families.

We visited Jane and her two adult sons. Jane is an elderly woman who has many painful illnesses. She was feeling better after her new Doctor tried a new medication and she was planning a little vacation. She was nervous about leaving home and shared her hopes and her anxieties. We have known Jane for about thirteen years through our earlier Mission parish work. She was happy to pray with us and asked our blessing on herself and her sons.

We ended the day with visiting Roger who was the first man we had prayed with during our street ministry. He has had some troubles lately and was glad to have us visit. He wanted to assure us that he has to miss church sometimes but he is living as Christ wants him to live.  He is sharing his goods and gifts with his neighbors and is praying always. We blessed Roger and received his blessing and our day of pastoral visits was ended.

Thanks be to God for this day of blessings!

Co-Pastor of the Church of the Good Shepherd