How do we prepare for God’s coming into our midst? Some suggest that we establish empty and quiet places in our hearts and lives, spaces that the Christ-child may fill again on Christmas and spaces that prepare for Christ coming again to establish firmly the reign of God in peace, justice and love on this earth. The suggestion of quiet and emptiness is counter cultural as people become busier and busier in the Christmas and Holiday season. Similarly, actions that risk anything at all for peace are counter cultural. But then, Jesus is counter cultural from the start. To prepare for the coming of Christ the Scriptures for Advent 1 tell us to become people of peace and not dissension or militarism.

Our Hebrew Scriptures for  the first Sunday of Advent herald an age of peace when nations shall beat their swords into plowshares and study war no more(Isaiah 2: 1-5). Nations will come to God’s house on the highest of mountains for instruction in God’s ways so that we may “walk in God’s paths”. Clearly that instruction is instruction in the ways of peace and God’s path is the path of peace. (Is 2:3b)   The Epistle reading (Romans 13:11-14) tells us not to live in dissension-in quarreling and jealousy. Rather we should be clothed in Christ. To do this we have to become alert and awake from our sleep. To me, waking from sleep here means conscientization-to become aware of the injustice and lack of peace in our world, near and far. As near as our hearts and homes and as far as the corners of the world where terror and exploitation reign.

Rev. Gerard Darring ( http://liturgy.slu.edu/1AdvA120113/main.html ) in discussing the day’s readings from the Perspective of Justice, suggests:  Since Christ is coming at a time least expected, what if Jesus the Christ returned in 1994 when there were still nearly two and a half billion people living in countries where the annual per capita income is less than $400 or less? Or when 40,000 people died every day from hunger? Or when one fifth of the human race still do not have adequate housing? Or when billions do not have adequate medical care? Or when the neglect of the earth produced death of all sorts? What if Christ returned now ? Would we be found unprepared for the coming of the Promised One?  What do we have to do to bring the kin(g)dom of justice and peace to earth right now?

Rev. Beverly Bingle has some thoughts on being prepared:

“Over at Claver House this week the conversation turned to basketball,
and one of the guests, Matt, was talking about LeBron James of the
Miami Heat, the 6’8” kid from Akron, Ohio. On the off season, Matt
told us, LeBron works hard. He trains by running uphill in the snow.
He spends his vacation time studying every play to figure out how he
could have done better. He practices. A lot. That’s why he’s ready
when the season starts, why he’s been the NBA’s Most Valuable Player
four times. There’s a lesson there for us.

In today’s Gospel Jesus tells parables about being prepared. People
are going about their daily business. Some of them focus so much on
the details that they are not alert, not aware, not ready. Not ready
for the flood. Side by side, folks are at work, out in the fields, or
inside, grinding grain. We know it’s not the end times—some are left
behind. Jesus tells his disciples—and us—to be vigilant, be
prepared. We don’t know when salvation is coming to us. But we can
be sure we’ll miss it if we’re not ready.

We know how to be prepared in everyday life. In school we think about
the subject before class even starts; we do the homework on time; we
read extra materials when we’re on break. When the test comes—even a
pop quiz—we’re ready. We don’t just hop in a car with a Highway
Patrol officer and take the road test on our 16th birthday. We spend
time learning the rules, taking the class, practicing with a licensed
driver. Or when there’s a baby coming. We read the baby books. Talk
with family and friends who’ve been through it. We get diapers ready.
Lots of them. When the baby comes, we’re not taken by surprise.

It’s like the parable of the 10 women waiting with lamps for the
wedding feast. We know that we need to have oil in our lamps. Once
the wedding party gets there, it’s too late.

During Advent we have time to make sure it won’t be too late for each
of us. The season invites us to practice so we can be ready for
Christ to be born in us, ready for the reign of God in our world here
and now.

How did Jesus get ready for the crowds, the healing, the mission? He
went off and prayed. He watched what was going on, and thought about
it, and took action. He listened, and he even changed his mind,
putting justice and compassion ahead of his own ethnic prejudices,
like when he listened to the Syrophoenician woman pleading for healing for
her daughter, and he yielded to her pleas. That’s how we can do it:
we know the way—Jesus has shown us. We just have to practice.

Now it’s true that LeBron James is a multimillionaire. He donates a
lot of money to the Boys & Girls Club and the Children’s Defense Fund.
He established the LeBron James Family Foundation, that holds
bike-a-thon in Akron every year to raise money for various causes. He
does a lot of good.

But we don’t have to be athletes, or public figures, or even wealthy
people to do good. LeBron is doing basketball right, and he’s doing
philanthropy right, but that’s not our job. Our job is getting
Christianity right. And our impact can be even greater. Our actions
can bring the reign of God to life, here and now, for everyone we
meet. We can change the world.

So let’s get ready. This Advent, let’s each of us pick one thing to
practice our Christianity on. Like setting aside some extra prayer
time. Like actively listening to someone. Like smiling at strangers.
Even smiling at friends and family, which can be a lot harder.

In the next four weeks, we’ll be putting together the decorations and
the gifts and the tree and the feast. We’ll be getting ready for
Christmas. As we do that—that everyday stuff, that holiday stuff—we
can practice being Christian—welcoming Emmanuel—God-with-us—in
everything we do and everyone we meet”.

And, I add, there are some of us who have the courage to be activists for peace-who take the swords into plowshares scriptures more literally.  Rev. Daniel Berrigan and his brother Philip were the sainted leaders of the Plowshares Movement for non-violent action for peace.  In the early 1980’s now ARCWP woman priest Judy Beaumont then a Benedictine Sister, participated in a “Plowshares Action” called Trident Nein” to demonstrate the immorality of Trident submarines. The price of one of those could wipe out poverty in large sections of the USA or the world. She was imprisoned for several months for this crime. During her time in prison she worked on prison reform for women. Later she wrote”Prison Witness: Exposing the Injustice” in Swords into Plowshares: Non Violent Direct Action For Disarmament” edited by Arthur J. Laffin and Anne Montgomery (Harper and Row,Publishers, 1987).   Currently there are several wonderful activists, including ARCWP woman priest Janice Sevre-Dusynska,(support person) who participate in Plowshares Now and have risked breaking laws and standing trial for peace. They stand for peace and against activities like drone warfare where, in the name of all of us in the USA many thousands of innocents are killed.   Rev.Janice is currently on a year’s probation in which she cannot participate in another “illegal” action for peace.  This is a hard sentence for those who get it, something like bridling John the Baptist.  Others who have courageously acted against nuclear stockpiling with Plowshares Now here in the USA at the Oakdale Nuclear Reservation in Tennessee including elderly Religious Sister Megan Rice and Michael Walli and Greg Boertje-Obed  await trial and probably severe prison sentences. It is not easy to take this kind of stand for peace, and we are thankful for those who are doing so and keep them in our prayers especially during Advent.

For ourselves, we can study how our nation is currently making war and support those candidates and leaders who truly are peacemakers. In our own lives we can be peacemakers, turning away from malicious gossip and tensions that divide families and communities and the people of God and those who serve the people of God. We can support Pope Francis in his pleas for peace and for priority on the poor while turning away from the ways in which those in power in the church and in the governments represent the interests of the rich and powerful, and embody them.   We can embody peace, tolerance and radical love in all that we do and say. That is enough challenge for this advent season. Even so, Come Christ Jesus, Come. As Rev. Bingle says “we will be ready”. 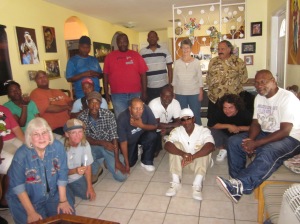 2 responses to “Preparing the Way for Christ: Revs. Bingle, Darring and Lee Dialogue-Advent 1”