A shoot will sprout from the stump of Jesse;

From Jesse’s roots, a branch will blossom.

Have you ever felt like a tree cut down? Like a dead, sap bleeding, or dying stump instead of the flourishing tree you were before the axe of life’s events did its work? Do you know people who have been cut down before they could even grow? Or those who grew well until hard events cut them down? I know and serve such people and I know what it feels like to be a tree cut down. Poverty is a great axe that cuts new and older trees down without mercy. After almost thirty years of serving the homeless, I still wonder how anyone survives it. How physical survival is possible let alone emotional and spiritual survival. I have learned sadly that some do not survive. We have a Wall of Remembrance in our church where candle lights remind us of the lights that went out while homeless. But most do survive and I see those shoots coming forth and blossoming every day. It is a miracle of the spirit. Yet, if I do not speak and act prophetically, if we all do not cry out at the structures that continue to produce homelessness and act to remedy it, we are silently and tacitly in the tree cutting business. 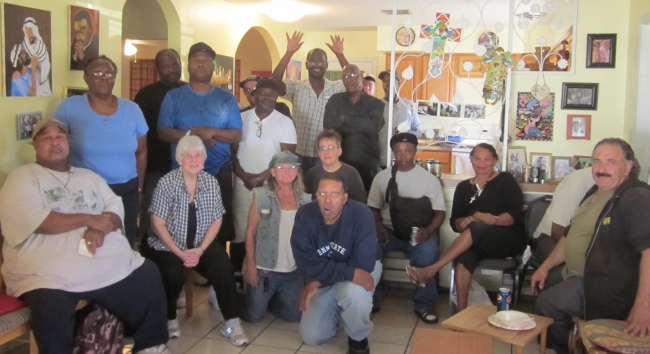 And I see the fruits of racism in the lives of all I serve, black, white, brown, yellow, poor or rich. Race still can put limits on growth, interactions, and opportunities despite the ultimate great success of the Civil Rights Movement. Whole peoples and nations, whole forests can be wantonly cut down by prejudice, discrimination, oppression and exploitation. The Jewish people were cut down again and again throughout history and yet they survive and Israel lives. The prophet Isaiah and John the Baptist would say-yes, yes, live on, but continue to ACT for Justice and peace.  Now, in Palestine, in the spirit of God, act now for justice, and peace.

And let us act to accept and respect difference. Difference such as gayness or facing a host of other life challenges strikes blows to the young trees that can bend and break them.  Much of youth suicide is connected to being different and to being bullied about it one way or the other. I serve the “trees” cut down and I see the shoots coming forth and the fruits blossoming despite the stunting experiences endured. I rejoice at those shoots and tend them carefully. I know it in my people and I recognize it even as I know it in myself. I know it intimately, from growing up in relative poverty, from being a woman, from facing homophobia and heterosexism in its many subtle and not so subtle forms, from health challenges that change everything in one moment, from facing many losses, and from the aging process that keeps one humble.

And so I look to the root of Jesse, to the shoot that came out of the cut off tree, from the stump itself and blossomed, died and literally rose to lead us as the people grafted into the tree of Jesse, the tree of life. I look to Jesus the Christ whose birthday we celebrate at Christmas, whose presence we welcome into our lives and see in every suffering and beautiful face, and who comes again in us as we are Christ to one another and who will come back again when the job of building the kin(g)dom of God is closer to completion. I look to this Christ to know that we can all grow back beautiful and strong from the stump of a tree. The Christ who grew from the tree of cut off and restored Israel, the Christ who grew from the wood of the Cross, who knew how to suffer with the suffering and how to bring rising to new life to each and every one of us.   I love this shoot sprouted from the cut off tree, from Jesse’s roots. I wait for the fullness of Christ dwelling among us. I stand with the rough clad John the Baptist in our Gospel for this day (Matt 3: 1-12) and baptize with water waiting with him for the coming of the baptism of fire and the passion for justice and peace into each life redeemed by baptism. Together we are waiting to see, watering, and nurturing the life inherent in the seed through baptism.  Sometimes with John and with Christ Christ we must even be abrasively prophetic to cut away the weeds that choke out the new life.

During Advent we wait for the coming of Christ even as the ancient prophets waited for and heralded the coming of the Messiah who would bring in the reign of God-when justice and peace would wed and love would be the rule. When “the lion would lay down with the lamb” when there would be no predators or oppressors and all would dwell together in a peaceable kin(g)dom, paradise regained where there would be justice and fairness, especially for the poor and disinherited (Is 11:1-10).  Isaiah wrote late in the seventh century when the Northern kingdom (the northern outskirts of Jerusalem) was annexed to Assyria and Judah lived uneasily in its shadow as a tributary. He longed for Israel (and the known world) to be a free and peaceable kingdom where the faithful could live a life of loving God and especially the poorest of their neighbors. It is said that prophets afflict the comfortable, and comfort the afflicted. In this case Isaiah is both challenging and comforting the afflicted Jewish faithful who are oppressed and perhaps emerging and reuniting from exile. God will restore the remnant of Israel.  Yet the prophetic voice reaches beyond those times to the coming of the Messiah from the root of Jesse, the father of King David, the shepherd king of Israel. The writer of Matthew shows Jesus as the fulfillment of prophecy.  Yeshua bar Joseph, Jesus son of Joseph, as his patriarchal lineage was then traced, was in the line of Jesse. The Epistle (Romans 15:4-9) also tells us that we are to accept one another as Christ has accepted us. Through Christ the Gentiles also have cause to “glorify God for showing mercy”, God’s praise spreads throughout the nations. How thankful we are.

I love the words of John the Baptist- don’t just count on your religious connections “Give some evidence that you mean reform!” “Produce that fruit as evidence of your repentance”! (Matthew 3:8). Act, don’t just talk.   And what fruit is that? -It is the fruit of justice- preparing the way of our God is preparing the way of love-love of God, of neighbor and of justice and peace. The Psalm of the day,Psalm 72, is the hope of the poor- “For they will rescue the poor when they cry out, and the afflicted when they have no one to help them…the lives of the poor they will save”. (Psalm 72:13-14). The TIB translation broadens the “king” to the leaders. Yes, God will raise leaders to save the poor, it is the job of the Christ and it is our job. To the extent we leave it undone we need to repent and to do it!   Pope Francis was caught sneaking out at night to give food to the poor-we don’t even have to sneak! Amen.