Fr. Jerry, Punished by Vatican for Concelebrating with Woman Priest Says “I Will Not Do Penance For My Convictions” 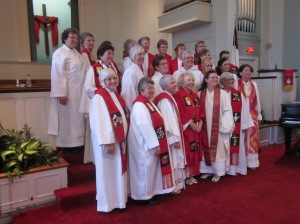 Father Jerry Zawada saw the light that God calls whomever God will call to serve as priests. He, and Frs. Bill Brennan and Roy Bourgeois have had the courage to walk in the light with ordained women. We are so thankful for each of them, for their courage and vision. The response of the Church has been severe punishment to them. But we know that they are priests forever and that we and all of God’s precious people are blessed by their service and their prophetic disobedience. As we share this news about punitive action we pray that Pope Francis ,whose eyes are open and actions strong  on many of the church’s abuses regarding priorities, power and money, will also see and act on its unjust and vengeful treatment of women priests and their male priest supporters. Lift the “automatic excommunications”, lift the punishments. Who are we to judge the call of another? The call to serve as priests and the call of conscience to support women priests is a sacred call. We are so grateful for Fr. Jerry who risks all in his life as a peace activist and a supporter of women’s ordination.

Below is the Journal Sentinel story of 3/28 about Fr. Jerry and Bishop Bridget Mary’s response.

http://www.jsonline.com/news/religion/vatican-punishes-wisconsin-priest-for-saying-mass-with-female-priest-b99235591z1-252965231.html
Journal Sentinel
“A 76-year-old Wisconsin priest and peace activist has been ordered by the Vatican to spend the rest of his life in prayer and penance for concelebrating the Catholic Mass with a female priest in 2011.
Father Jerry Zawada had been previously sanctioned by his religious order, the Franciscan Friars Assumption of the Blessed Virgin Mary Province in Franklin, for the November 2011 incident, pending Vatican review.
The Vatican order, issued by the Congregation for the Doctrine of the Faith this month, strips Zawada of his right to function publicly as a priest, and orders him to spend his life in prayer and penance at the order’s friary in Burlington.
“I don’t mind the prayer part,” Zawada told the National Catholic Reporter in an interview this week. “But…when they say that I need to be spending time in penance, well, I’m not going to do penance for my convictions and the convictions of so many others, too.”
Zawada could not be reached at the Burlington friary on Friday. A friar who answered the phone there said he had fallen and was taken to the hospital.
Zawada is among two Milwaukee-area priests sanctioned for concelebrating Mass with Mother Janice Sevre-Duszynska, a Milwaukee native ordained in the dissident Catholic womenpriest movement, at annual protests at Fort Benning, Ga.
In 2012, Milwaukee Jesuit, Father Bill Brennan, was ordered not to celebrate the Eucharist or other sacraments publicly, or present himself publicly as a priest, for saying Mass with Sevre-Duszynska in November of that year. That sanction followed the excommunication and defrocking of School of the Americas Watch founder Father Roy Bourgeois, a Maryknoll priest who participated in Sevre-Duszynska’s 2008 ordination in Lexington, Ky.
The Roman Catholic Church prohibits the ordination of women.
Sevre-Duszynska, of Lexington, is ordained in the Association of Roman Catholic Women Priests. Women Priests say their ordinations are valid because they were conducted by bishops who stand in “apostolic succession” — the line of Catholic bishops who stretch back to Jesus’ apostles. The Vatican rejects that argument.”

ARCWP Bishop Bridget Mary’s Response:
It is a sad day for the Roman Catholic Church when the Vatican punishes  contemporary prophets  and human rights activists like  Fr. Jerry Zawada, a faithful priest for following his conscience in co-presiding at a liturgy with Roman Catholic Woman Priest, Janice Sevre-Duszynska.

Franciscan Fr. Jerry Zawada, Jesuit Bill Brennan and Maryknoll Roy Bourgeois are contemporary prophets standing in solidarity with Roman Catholic Women Priests on our journey to gender justice and equality in the Roman Catholic Church.  Our sister, Janice Sevre Duszynska invited her brother priests to co-preside at liturgies. Their “yes” is a historic step forward for the church and reflects the sense of the faithful in the United States and Europe. We are leading the church into a new era  partnership and equality in grassroots communities. 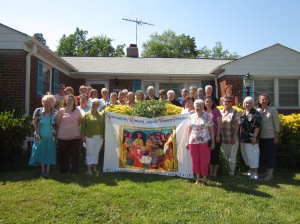 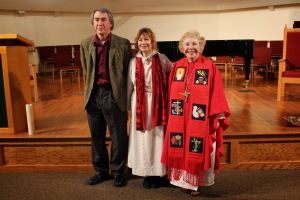 The Vatican Congregation for the Doctrine of the Faith  (CDF) should affirm  the primacy of conscience, a central Catholic teaching, not persecute Catholics who follow their consciences. Every Catholic is obliged to follow his/her conscience even if it means excommunication as St. Thomas Aquinas, medieval theologian taught. Women priests and our supporters are living prophetic obedience to the Gospel. We are following our consciences.

Therefore , our brothers in the CDF should cease and desist  from all forms of spiritual violence and bullying including ecclesiastical punishments such as excommunication against women priests and our supporters.  We are your beloved sisters and  brothers, members of the Catholic family, by our baptism. Please treat us as Jesus would– as spiritual equals.