Rev. Judy’s Homily: Breaking Bread on the Road with Jesus-3rd Sunday of Easter 5/4/14 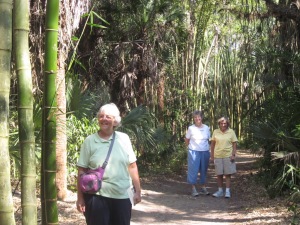 Life is full of roads-roads taken and not taken, well- travelled and less travelled according to the poet (Robert Frost). Some roads we take because we find ourselves on them, and some we choose to travel, to experience the journey, and to get from one place to another. Popular music characterizes the “road of life” as “lonesome” and charges us to look down the road before we travel on. That is to examine the road we are taking before we travel too far on it-to look up and see our Maker before we are called back to God. Willie Nelson sings about wanting to “get on the road again-to make music with his friends and see things he never saw before”. The road symbolizes life and adventure. An old song urges us to “detour, there’s a muddy road ahead”, showing how deep we can get stuck in the mud if we fail to heed the detour signs. The Psalm of the day (Psalm 16) tells us that God will show us the path to life. What a wonderful path that is-and it is where we meet Jesus.  An old hymn from the black church tells us that we need to walk up the high way to heaven, to God, but the way is rigorous, “none can walk up there but the pure in heart.”  Yet, when we try to walk that road “My way gets brighter, my load gets lighter, walking up the king’s highway; Christ walks beside me, His love to guide me…” And that is the Gospel for today. In Luke 24:13-35 two heart- broken disciples are walking on the road to Emmaus and Jesus the Christ walks beside them. But, they fail to recognize him initially.  Whatever road we are walking on Christ is there teaching and guiding us, but too often, like the disciples, we fail to see, listen and understand and we are unaware of Christ’s presence until something happens to help us recognize Christ beside us.

Sometimes we travel to get away from and sometimes we travel to get to a desirable place. When Cleopas and the other disciple, who may have been his wife, met “the stranger” on the road they were headed from Jerusalem to Emmaus (Im’Was) possibly some seven miles North of Jerusalem. They were walking away from the place where Jesus died his violent death and where there was an empty tomb.  They were walking away from sadness and disappointment and fear-but they took their obvious sadness with them (v.17b TIB).  They were walking away from a political killing and dashed dreams of the kind of Messiah who would have seized political power finally vanquishing the Roman oppressors. Yet they were walking to a place full of political and historical meaning. The Maccabean revolt was successful in Emmaus, yet the Romans later seized Emmaus and put it and Jerusalem under their tyrannical power. Still earlier in history there was a plague in the area that killed over 25,000 people making it one of the saddest places in the region. We don’t know what was drawing the two disciples toward Emmaus but we know that they were preoccupied with the events of Jesus’ death and “disappearance”.  When “the stranger” they met on the road did not seem to know about these events they marveled at his “ignorance”. It was all they could think about.

Now it was Jesus’ turn to marvel at their stupidity-they had known and followed him but they did not understand that he was the Messiah and what the Messiah is really about. Jesus said “what little sense you have!’(TIB) ”How foolish you are!” (NAB). “Oh dull-minded and heavy-hearted, slow to believe all that the prophets have spoken….” (The Peshitta). Then,with utmost patience, Jesus taught them the meanings of the Scriptures-“he interpreted to them from all the Scriptures concerning himself.” (The Peshitta-Luke 24: 25, 27).  But their eyes were “blurred” (Peshitta) and they still did not see who he was. They did not really know who Jesus was, they were short on faith and they simply did not expect to see him again.  Only when he broke the bread with them in his characteristic way did they recognize him.  They acknowledged that their “hearts were burning as he talked to us on the road and explained the Scriptures” (v.32). Then they immediately got up and returned to Jerusalem where they joined the other disciples and shared experiences of the risen Christ (v.33).

When Cleopas and his companion recognized Christ they turned around and returned to Jerusalem. They changed direction on the road and they changed their sadness into passion and excitement. Similarly, when Peter preaches after the Pentecost experience in the reading from Acts he is also on fire and he preaches about the risen Christ:  “it was impossible that death should keep its hold on him” (Acts 2:24).  In First Peter (1:17-21) we hear that through the risen Christ we are believers in God and our faith and hope are centered in God. Peter who denied and often misunderstood Christ, finally understood and became a major evangelist, including everyone in the love of God. Like the two on the road, Peter didn’t get it at first. It took the death, resurrection and meeting Christ again to reveal Christ to those closest to him. It is no wonder we sometimes do not recognize Christ on the road.  And yet, every time we break the bread and share it Jesus the Christ comes to us again, fresh and whole.

Yesterday a woman came to our church asking for gas money to get on the road again. I invited her in to tell her story and see if gas money was all we could do for her. Flor is a woman in her mid- fifties who looked worn and tired, thoroughly exhausted. She has been living in her small car at a truck stop for two months.  She had spent her life as a wife and mother, and was divorced. After the divorce, despite past and present depression, she took hold and completed college and worked at a career for several years. Then due to a series of chronic and acute health issues she could no longer work. She began a Master’s program and lived on student loans and unemployment insurance. When these ran out she tried to work again but was hospitalized many times and had two surgeries. She applied and was initially denied Disability. A family member helped her for over two years until, through a lawyer, she finally had her Disability hearing. When she was told the decision would still take 6 to 8 months the family member could no longer help. She left her beloved pet with the family member and lived in her car.  She did not know how she would survive this way. In a moment of pure grace, I told Flor about a room in back of our church where we offer hospitality on rare occasion. However, the space was taken until the current resident moved out which may be in two weeks. Her spirits lifted and I decided to see if our co-Pastor Judy Beaumont knew about this man’s plans. When I checked with her, she said he had already left without a word taking a few things that were not his with him! We immediately decided to offer Flor the room then and there. She cried and said that could not believe it, that God had surely guided her to our door. She moved her few things in, had a cold drink, rested on her bed a while and then took the car to get her beloved pet back.  Indeed, each of us had met Christ on the road this day.

Blessed Teresa of Calcutta said “Into each of our lives Jesus comes as the bread of life-to be eaten, to be consumed by us. Then he comes as the hungry one, the other, hoping to be fed with the bread of our life, our hearts loving, and our hands serving”. If we see the living Christ as there for us always and especially on the difficult roads of life, it is wonderfully true. But if we only see Christ as some kind of personal solace or comforting relationship we are the “dull-minded and heavy-hearted” and we don’t get it. We are called to be the Body of Christ for one another, to feed the most vulnerable and outcast among us with the bread of our lives, our love and our hands.  This is what Jesus did, this is what he taught and this is where he meets us on the road. 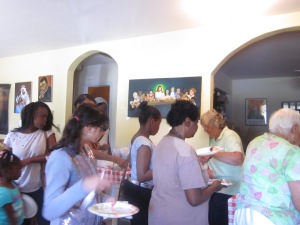 We pray: Our loving God, help us to recognize You when we meet You on the road. Help us to be the bread of life, the body of Christ for one another. Amen. 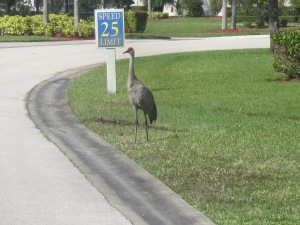 3 responses to “Rev. Judy’s Homily: Breaking Bread on the Road with Jesus-3rd Sunday of Easter 5/4/14”