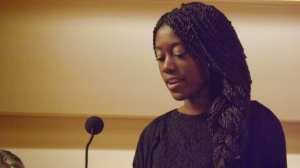 The following is a Reflection that our Youth Leader Efe Jane Cudjoe offered on Pentecost Sunday. I love the way she see the face of God and God’s spirit working in communities throughout the world that she encountered in her Semester Abroad on three continents. The Congregation gave her a rousing round of applause and Amens after she shared this last Sunday. My own comment was that I don’t have far to look for the younger generations of women priests in the making!. Efe is with us again for the summer shepherding our youth on special trips and educational outings. We are so blessed to have her with us again.

I honestly can’t express how happy I am to have safely returned from my journey and I would like to thank you all for your continual prayers and support.  I would like to share with you all just a little bit about my experience and some of the things that I have learned.  But you will have to forgive me for reading a bit of something that I have written, because in attempting to retell my experiences, it is still very hard for me at times to concisely and coherently express some of my feelings.

I began my study-abroad journey on January 25th of this year.  Before beginning the multi-country journey to Vietnam, South Africa and Brazil, I had a very, very cold two-week orientation in Washington D.C.

During this time, I had the opportunity to explore our nation’s capital and to speak with various program directors.  And it was these same program directors who often stated that the experience that I was about to have would not only have a lasting impact on my life, but also give me a different outlook on many things.  And although in the moment I may not have appreciated these words as much as I should have, now that I have been given the opportunity to reflect I can honestly say that this journey did.  It not only restored my faith in humanity despite all of the corruption, wars and brutality that plague our world, but it also strengthened my spiritual connection to God as I saw God’s love manifested in very different individuals facing very different issues in very different countries.

So I would like to start with Vietnam.  Vietnam, I can truly say that priory to entering the country I really did not know too much about it and had also been given a very one-sided view from history classes recounting the Vietnam War and its aftermath.

But what I did find, from my experience, was that quite contrary to popular belief with the the United States, I was not walking into a country with hearts and homes still buzzing with hostility toward Americans and still living in  experiences and histories of the past.  Instead I walked into the home of Phuong and Victor who welcomed me who they referred to as their daughter.  I immediately felt at home as they embraced me with kind hearts despite some apparent societal, language, and even physical differences.

From the communal dinners that we shared with all members of the family  – a true manifestation of what Jesus’ idea of what a supper should be with all members of a family or a community coming together to spend time together and enjoy the presence of one another.  To the playful laughter of a five-year old girl dancing around her classroom in the peace village, although she and her classmates were suffering from severe physical malformations, likely the result of agent orange.  Agent Orange, a pesticide used by the British and U.S. militaries during the Vietnam War in an attempt to strip the land of its food resources.  A sort of food toxin that still has lasting impacts.

But it was in these communal family dinners and in the laugh, love and warmth exuded from this young girl that despite her daily obstacles she was still happy to be alive and joyously running around that I saw a physical representation of God’s love, presence and ability.  But, before I knew it, my time in Vietnam was over and I was on my way to South Africa.

South Africa.  When I first arrived in Zwelethembe in South Africa, I was greeted by at least twenty-five five-year olds that were running around the area.  They just looked at me, and saw my skin is similar to their own and asked me , “Are you xhosa?” Xhosa referring to the majority of the people that lived in the township that I would be studying in for two weeks.  A township in which some regions amidst the lack of running water, formal housing, and food still worked to maintain a sense of community.  A township in which my host mother, Mama Eunice, was not only recovering from a recent life-threatening health issue but also trying to provide for members even though she could not work because of her illness.  And even given everything that she had recently gone through she would still prepare a plate for children in the neighborhood that would come to our door pleading for food.  I was so grateful for her giving spirit, kindness and joy and I was also able to see the presence of God in each of her gentle actions. 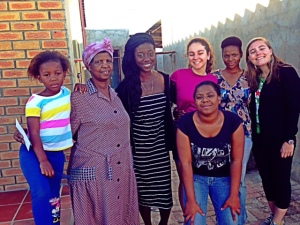 Now finally to Brazil.  At this point in the journey I had been traveling for over three months.  I began my time in the middle of the Atlantic forest near a small town called Barradoturvo.  This region was said to be one of the poorest regions in the country.  Largely because the people chose to live off the lad and use the natural gifts that they believe they had been provided by God.  During my time there, I learned so much from members of the local community.  For example, Pedro, who was known as the regions wise elder stated to us that there were many things that can be learned by our eyes but they are invisible to our eyes because we are not aware of them.  As we become more aware of things we are then capable of seeing them.  A statement that I think can certainly be extended to the love and presence of God.  His wise words and warm spirit are something that I will certainly never forget.  With the largest smile on his face he also once stated that “when it comes to being poor there are two things: one is to be poor and one is to have no money.  Yes, yes it’s true I may have no money and day in and day out life can be hard, but to call me poor – no, no I won’t stand for it.  I am surrounded by nature, my beautiful wife, and all other wonderful gifts of God.  I am healthy and I am living happily and for that I have all the riches in the world.  You know, we all have so many riches; we just have to open our eyes, ears, and hearts to begin recognizing them.”  Each of the stories and words of advice he shared with me were truly inspiring.

So I know that I have been speaking for a while but I would like to end by leaving you all with a term that I continually heard in South Africa, that really stuck with me.  And it’s Ubuntu -we are who we are because of other people.   I would also like to extend this in saying we are who we are not only because of other people but most importantly because of the love, the hope, the determination and the kind will that others have shown us.  (I am blessed with) the kind will and love of two very special pastors who have made it their mission to continue working toward a better tomorrow and the love of a community that is inclusive of all.