Here we present two homilies of the feast day of St. Peter and St. Paul.  Rev. Beverly Bingle  and Rev. Judy Lee, both Roman Catholic Women Priests share their reflections on this day. With somewhat different emphasis they compliment each other in content and present a  well-rounded theme for the day: we are church now! 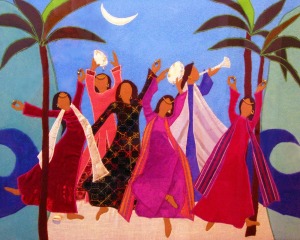 Opening Prayer–Our loving God, today we celebrate the beginnings of the church and the chief Apostles Peter, Paul and Mary of Magdala, James and others under whose leadership the church was solidly planted to grow throughout the centuries. We pray that we may give ourselves wholly to tending and growing the church that they planted, re-freshed and em-powered by Your most Holy Spirit so that the church may be living, vital and new in our time. Grant this through Jesus your Beloved who lives with you and the Holy Spirit, one God forevermore. Amen.

Acts 12:1-11  Peter is imprisoned and rescued as the people pray fervently

Psalm 34 R. O taste and see that God is good!-The poor cried out and God heard

ALLELUIA “Mary…Go to my brothers and sisters and tell them ‘I am returning to my Abba and your Abba, to my God and your God….and she told them…” (John20:17-18)ALLELUIA

The Gospel according to Matthew 16: 13-19   “On bedrock like this I will build my community”

A few years back there was a wonderful folk singing group called Peter, Paul and Mary.  You may remember them singing “If I had a Hammer, I’d hammer out justice… I’d hammer out the love between my brothers and my sisters all over this world.”  The energetic blending and harmony of the male and female voices was their hallmark. Peter and Paul were nothing without Mary. I wish the church knew this! For today again we have a feast day for Peter and Paul and not even a mention of Mary of Magdala who was every bit the leader and authority they were. Partly she is omitted because she is a woman and partly she is omitted because she taught some of Jesus’ less well known teachings that were in conflict, it seems, with the party line, the accepted doctrine of the church after the 4th century and the Council of Nicea.  James, the brother of Jesus who headed the church in Jerusalem and was actually thereby senior to Peter is also not mentioned.   And without him the Judaic base of Christianity is in danger of minimization and loss. We have to remember that the winners of debates, doctrinal and otherwise, write the final story. Yet, the Spirit still speaks and the story is still being written.

Today the church celebrates the Apostles who planted the seeds that grew into the living church over the centuries. We celebrate Peter, whom Jesus loved and chose for a special role despite his “thickness” and “hard-headedness”. We know that in Aramaic “Kepa” (stone) is an insulting term meaning “stupid”. (George Lamsa, Idioms in the Bible Explained…1985, pp.93-94). Jesus, in his love for Peter, turned the negative nickname into a positive by saying that Peter would be a bedrock in building the church. (We remember that Christ is the living Cornerstone that we build upon).  Peter, with all of his faults gave his all, facing jail, persecution and martyrdom for the church. Paul was an equally unlikely choice of leader. He persecuted Christians, but his life was turned around when he encountered Jesus and became the church’s greatest missionary. Paul then poured out his life “like a libation” for the Gospel suffering imprisonment and martyrdom as Peter did.

Like now, there was conflict in the early church. Peter had conflicts with Paul and also with James, the brother of Jesus who headed the church in Jerusalem. James is not mentioned in our readings but we honor him and our Judaic roots this day. Nor is Mary of Magdala mentioned, but Peter and his brother Andrew struggled with Mary’s leadership and teachings while Levi defended her authority according to the Gospel of Mary written early in the second century. Esther De Boer, 2005 and Karen King, 2007 point out that scholars accept Mary as an Apostle to the Apostles and a strong church leader, prophet and teacher in the early church. Once again Christ chose an unusual leader, a woman whose name was all too easily written out of history, one who was completely transformed by Jesus and taken into his confidence.  Today we honor her leadership along with that of James, Paul and Peter and all female and male leaders of the early church, especially those whose names have been written out of history while their contributions live on.  We honor all women and men and youth whose love has been poured out to build the church and spread the Gospel. This includes all of us, for we now are the living stones that build today’s church. Amen.

Today’s readings,
and our celebration of the solemnity of Saints Peter and Paul,
show us the beginning of a long history of missing Jesus’ point.
Who is a disciple?
Who is an apostle, the one sent, the one commissioned?
Who are the Chosen?
Nearly two thousand years of history and politics
have led us to understand Matthew’s Gospel in specific ways,
and those ways are not always what Jesus had in mind.
_____________________________________
The scholars of the Jesus Seminar observe
that the conversation in Matthew that is today’s Gospel
is not a conversation that Jesus would have started.
Instead, they say, it was a common way for the early writers
to communicate a disciple’s “confessional statement”—
an individual’s assertion of belief
that served as a kind of credential of authenticity in the church.
The New Jerome Biblical Commentary—
the standard Catholic reference book—
sees Matthew 17-19 as revelatory
of the varying opinions of the early Christians
as they struggled with questions
about who held authority in the post-Easter church
and who had the commission to leadership.
Matthew’s Gospel gives the authority and commission to Peter.
Our reading today from the Acts of the Apostles
also shows authority for Peter
through the prison break story, the credential that
“God really did send an angel to rescue me,”
Our second reading from the letter to Timothy, however,
shows authority for Paul, when he claims that
“Christ stood by my side and gave me strength.
So that through me the proclamation might be completed
and all the nations might hear the Gospel.”
Using the same type of story,
the Gospel of Thomas gives authority to James,
and Galatians gives authority to Paul.
________________________________________
Two other details in the Gospel passage reflect the power struggle
that was going on among members of the early communities.
Scholars say that the pun on “petra” and rock
asserts Peter’s primary position in Matthew’s community,
not any intention by Jesus to start a church.
Scholars also point out
that the “binding” and “loosing” were rabbinical terms
that refer to the authority to pass on teaching,
not the power to forgive sin.
_____________________________________
History has developed two teachings from this Gospel
that bear closer examination:
the primacy of the Pope
and the power of the confessional.
Both of these teachings ignore other scriptures
that shed different light on what Jesus was really about.
________________________________________
First, the primacy of the Pope:
Jesus was a Jew, and he never stopped being a Jew.
He did not found a church.
The first apostles and the first disciples were also Jewish.
They did not found a church.
The Gospel of Matthew was written for Greek-speaking Jews
who followed the Way of Jesus.
Historical events, political upheavals,
and religious arguments over the centuries
brought about the assertion
that today’s Gospel references to Peter
as the “rock upon which I will build my church”
and “the keys of the kingdom”
mean that Jesus founded a church
with Peter as the first Pope.
But that’s not what Jesus said.
________________________________________
Second, the power to forgive sin in confession.
In Matthew’s Chapter 6, Jesus is wasn’t just talking to the apostles,
not just talking to the disciples.
When he says we are to forgive each other’s sins,
he’s talking to the crowds, to everyone.
In the early Christian community people forgave each other’s sins.
Over time, though, forgiveness developed into a personal
rather than social process,
and eventually the rule was laid down by the hierarchy
that only priests could administer the sacrament.
But that’s not what Jesus said.
________________________________________
Part of what makes Pope Francis so attractive is his pastoral nature
and his willingness to look at things
through the signs of the times.
In April, for example, he told the Pontifical Biblical Institute that
“There is a past and there is a present.
There are the roots of faith:
the memories of the Apostles and the Martyrs;
and there is the ecclesial ‘today,’
the current path of this Church which presides over charity,
the service of unity and universality.
All this must not be taken for granted!”
Francis is realistic.
Our Church today is where it is.
And, good as it is,
good (and bad) as it has been over the centuries,
it needs to sift through the signs of our times
and examine them in light of the bedrock of Jesus’ teachings.
_____________________________________
And what is the bedrock of Jesus’ teaching?
He didn’t say to start a church.
He said to love one another.
He didn’t say to set up rules for forgiveness.
He said to forgive one another.
And Jesus’ teaching tells us the answer
to those questions we started with:
Who is a disciple?
Who is an apostle,
the one sent, commissioned to spread the Good News?
Who are the Chosen?
It’s the crowds.
It’s the anawim, the poor and oppressed.
It’s the people at City Hall and the people at Claver House.
It’s us. 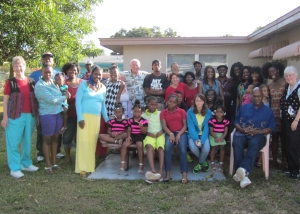