Spanish Nun: Same-Gender Relationships Are a ‘Sacrament’ of God’s Love

The sun is breaking through the darkness.

This is an article from the New Ways Ministry Blog by Bob Shine. What a courageous nun!

All I can say is Amen!

Spanish Nun: Same-Gender Relationships Are a ‘Sacrament’ of God’s Love

Spain’s Sister Teresa Forcades is a well-known activist for women’s rights, political autonomy in her home country and region, and economic justice. She has been labeled “Europe’s Most Radical Nun,” and she challenges the Church as often as she challenges unjust structures in society.

This Benedictine nun is also an advocate for LGBT people, offering the following insights in an interview earlier this year. Sr. Forcades goes beyond allowing for LGBT people to express themselves sexually and have relationships to celebrate them as profound and beautiful signs of God’s love in the world: 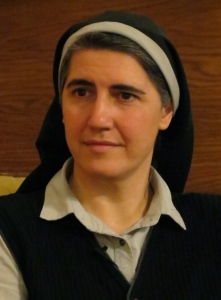 “The religious analysis that understands sex as something that is intended for procreation is a utilitarian view of human love and is contrary to Christian spirituality. To surrender to the mystery of an interpersonal relationship is to surrender to growing towards being an image of God, towards incarnating what God represents on earth. Upon entering, you receive a gift, that this union could engender a child, but that’s perfectly compatible with you being able to be responsible and use contraception when you please…

“So I think that homosexual love is perfectly understandable to the church, because it has what is essential: it’s not having children, but an open intimacy to an interpersonal relationship that includes respect for the integrity of the other. Two people who love one another, desire one another, and respect one another are giving testimony: this is the sacrament, a visible sign — like baptism — that’s saying, ‘This creature is accepted in this community as any other.’ Trinitarian theology says that all sacraments are an embodiment of God’s love. God the Father, the Son and the Holy Spirit are different but they are not complementary. Love is not necessity; it’s not when I need you because I’m missing something. It can’t be utilitarian love.”

A tip of the hat to Michael Bayly who writes on on Catholic LGBT issues at The Wild Reed for drawing attention to Sr. Forcades’ powerful words. She has long been a proponent of LGBT rights, and a recent profile in The Guardian notes of Sr. Teresa:

“Before she took her vows in 1997, Forcades tested the other nuns by giving a talk on a group of gay Catholics who celebrated their sexuality as a gift from God. She was humbled by the nuns’ humane reaction and, so, joined them.”

In March, Sr. Teresa visited Baltimore and lectured on a variety of justice-related issues. She views change in the Catholic Church as many do, a bottom-up effort, saying:

“When I talk about church, we talk about how the Gospel inspired us. There are many kinds of church, and I identify with the people at the bottom, at the base. Many people have a hope that the Catholic church might change because of the pope, but if you look at history, change comes from bottom up, not from top down.”

You can read more about that visit in the National Catholic Reporter or read a profile of Sr. Teresa in The Guardian by clicking here.

From her lips to the bishops’ ears! But, in the meantime, it is those same-gender couples living out this sacrament of God’s love who are not waiting for change in the Church, but creating it from the bottom up. Gratitude that Sr. Teresa is willing to speak that truth to power, as she so often does!

2 responses to “Spanish Nun: Same-Gender Relationships Are a ‘Sacrament’ of God’s Love”