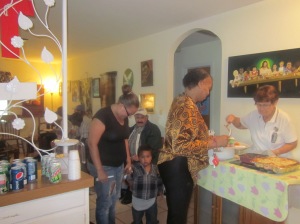 For the last three Sundays we have contemplated life and work in the vineyard with Jesus. God is good, deeply loving and giving to all of us, expecting only that we will tend the garden, work in the vineyard and produce the good fruits of service, compassion and justice.  According to the writer of Matthew Jesus teaches about working in the vineyard right before and after his Palm Sunday entrance into Jerusalem. His time is near and he knows it and foretells it, much the same as Moses, and prophets like Martin Luther King Jr. said that they would not be crossing over into the promised land with the people for whom they labored so hard.

In Matthew 20, we saw that God loved and rewarded all of the workers in the vineyard generously and equally. And we saw that some of the earlier workers resented the success and rewards of the later workers and they resented the generosity of God.   The newcomers were not welcome as equals in the vineyard. Bitter fruit for God, not the yield God wanted. Then, placed after Jesus’ triumphant entry into Jerusalem on the back of the foal of a donkey, in a second parable as told by Matthew (21), we saw that the son who said that he would work in the vineyard was all talk. He never went while the one who mouthed off saying he would not go, did go and worked at producing good fruit. Jesus notes that reviled tax collectors and prostitutes were entering the reign of God before the religious (those who said they would build the reign of justice but did not). Well, it pleases God to include the outcasts who came to do the work and at least one of the disappointing sons was working in the vineyard. Once again God is including everyone in the kingdom (kin-dom) and noting also how the kin-dom is lost by the very ones who entered the covenant to build it and care for it. More bitter grapes.

This week, we have two Vineyard stories, one from Isaiah 5:1-7 and one told by the writer of Matthew to the Jewish Christians of his community. The story in Isaiah is beautiful poetry and full of meaning. In the story Isaiah’s friend (what an appropriate theology-God as friend) has a beautiful vineyard that he cares for in every way, doing everything that can be done to make the preconditions for growing good grapes. But, alas, it is not tended and it yields wild grapes. So he, regretfully, lets it go to seed and briers and does not send rain upon it.  Then Isaiah explains:

“The vineyard of the God of Hosts is the house of Israel,

And the people of Judah are God’s cherished plant;

Our God looked for justice, but found bloodshed,

For integrity, but only a cry of distress”.

So clearly God dearly loves God’s people who are God’s “cherished plant”. That is so for the house of Israel (and also for the followers of Christ ) who agree to work in the vineyard and produce love, justice and peace. But they rest on their laurels and do not exert themselves to do the hard work of peacemaking and of serving those in need or challenging the oppressive structures that create poverty and need. They are to produce the fruits of justice and compassion. They are to be in right relationship with God and their neighbors. Instead they lack integrity, fight, promote war, and shed blood and cry in distress.  Sounds a lot like us in the present time. The witness of the religious so often falters in peacemaking and justice making.  So, sadly, God is disappointed once again.

It is this story that Jesus embellishes in what is often called the parable of the tenants (sharecroppers) who get greedy and kill those the owner sends to collect and distribute the profits. Now, I am usually sympathetic with those who are share croppers, they work hard and only make a small portion of the profits that they often owe back to the owner. But these tenants are downright ugly and mean-they beat, stone and kill to keep the profits. And, it becomes clear in Matthew, they even kill the son and heir who is sent to them. Not only is the work God asked not done, but those who remind the tenants of this are killed. And here, Jesus steps outside of the parable and forecasts again his own rejection and death. The stone that the builders rejected…..becomes the cornerstone.

Let us think about rejection.  For Jesus is asking us to stand with the rejected of society, those deemed so much less than and so expendable that there is no safety net to catch them when they fall through the bottom and spiral downward without an income or a home to call their own. Jesus knows what rejection is. He went from the high of acclamation on Palm Sunday to the horror of the cross within a mere week. He knew deeply what it was like for his mission and ideas and challenges to be rejected. He knew what it was like to be caught in a political net and have all he worked for ridiculed. He knew what it was like for friends to turn their backs and look the other way as he suffered. He knew what it was like to be the excluded one. The crucified one is the stone rejected by the builders.  And in each of the excluded and crucified ones we find God, we find Christ. His experience of horrific injustice unites him with all of the cast away and excluded. And it unites us, his followers, those who love him as well. And that is the work yet to be completed in the vineyard, the work of justice and love. It is very hard work, no wonder some redefine love on a light, abstract and almost ethereal level. No wonder we speak of being star dust rather than those who die with lungs full of coal dust.  But the work of love IS the work of justice. And justice work is not what a friend of mine calls “fru,fru airy fairy love”. It is love that gives itself away even unto the cross and beyond. And yet it is there as we stand by the cross of another outcast human being or accept it for ourselves that we are lifted by the experience of Immanuel-God with us in a way that is so profound it can only be defined as Love. 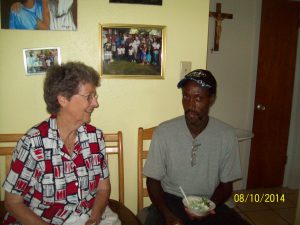