Here I will reflect on this years Palm Sunday and Passion readings using the Gospel of Mark, and also share some of my last year’s reflections along with those of Rev. Chava Redonnet, a priest of the migrant worker’s in Upstate New York.

This year we celebrate Palm Sunday and the Passion of Jesus with the readings from the Gospel of Mark. These are some of my favorite readings as the love of the people and the actions of women are prominently included.  In the readings for the blessing of the palms and the Procession into the church (Mark 11: 1-10) we see the people spreading their cloaks on the ground for the little donkey carrying Jesus to walk on.  When we discussed this at last year’s procession several people said: “I wish I were there to put my clothing on the ground for him”. For some of our homeless and poor people that would be putting all they own down for Jesus. Indeed, it is our very lives that we can spread before Jesus as we seek to be the Christ light in the lives of those around us. Paul in his Epistle to the Philippians(2:5-11) tells us that the humble Christ became completely empty and took on the image of oppressed humankind (TIB). It was many of these same oppressed humans,  poor, and oppressed by the Roman Empire and by the religious and political leaders of the time that Jesus took on, who threw their cloaks on the ground before him and hailed his reign, asking him “Save us!”( the meaning of Hosanna). The Epistle concludes that at the name of Jesus every knee should bow, but in strong identification with Jesus the Christ who assumed the image of “oppressed humankind” reverence and honor comes naturally as does a very special love for one who knew sorrow,rejection and suffering as they do, here and now.

Mark’s account of the Passion( Mark 14:-15:47) starts with a woman anointing Jesus with expensive perfume as he reclined at table at the house of Simon who had leprosy. First I love that Jesus and the disciples are at the house of someone who could well be outcast and seen as ritually unclean because of his leprosy. Then the actions of this woman who is not given a name speak loudly of her extravagant love for him. It may also be that she is also a disciple who does understand that Jesus is about to die, and she is anointing him with her kindness and the expensive nard for his burial, as Jesus later says when other disciples rebuke her. She may have been Mary of Magdala, or Mary the sister of Martha of whom there is a similar story, or a truly unnamed but loving follower. She “gets it” and she loves him and he appreciates this so much he says that wherever the Gospel is told her story will be remembered. I take great joy in remembering it here as she inspires us to love Jesus with all our hearts as we undertake this Holy Week walk at his side. 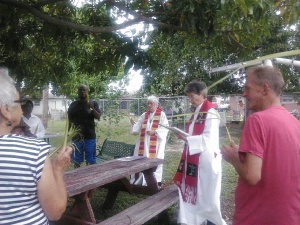 The rest of Mark’s passion contains all of the elements of the gospel story: the Last Supper, Peter’s denial and ‘disowning’ of Jesus, Jesus’ prayers in Gethsemane, his arrest and “trials” before the Sanhedrin and Pilate,the mocking soldiers, the crucifixion and the death and burial of Jesus. No matter how many times we read it or try to relive it with Jesus, we are moved.  At the burial some of the women who are remaining with him are named: Mary of Magdala (also known as the Apostle to the Apostles), Mary the mother of James the younger and Joseph and Salome. Mary of Magdala and Mary the mother of Jesus stayed til the very end observing where Jesus had been laid.  Biblical Scholar Esther De Boer makes the point that Mark is consistent in seeing women as important among the disciples of Jesus (Mark 3:34). When these women are named at the end it is to say that discipleship is not about power but about risking even in times of danger and remaining and serving until the end. (We recall that Peter and the male disciples ran off although,like Mary of Magdala, Peter returned to observe from afar.The fear of going to the grave was perhaps that the disciples would be crucified even as Jesus was, so it took much courage to be seen at the tomb.) “Thus, Mary Magdalene, Mary of James, Mary of Joses and Salome exemplify Markan discipleship and by doing so they are special among the other disciples” (P.117 in The Gospel of Mary: Listening to the Beloved Disciple, Continnum, 2004). De Boer also quotes Martin Hengel who notes that Mary of Magdala is always named first even as Peter is always named first indicating that Mary of Magdala and Peter hold comparable positions in the community of followers(p.119).

During Holy Week we stand with all disciples, women, men and children who continue to follow and serve despite risks, anxieties and fears. As women priests we are especially thankful for those women who served until the end and we pray to be faithful as they were so that we too, like Mary of Magdala, may see the risen Christ.

Churches all over the world will be adorned in palm branches this Sunday commemorating the joyful entry of Jesus into Jerusalem seated on the back of a donkey. In our church as in many Roman Catholic and other churches, people will gather outside in a procession to the church carrying palms and singing Hosanna, Hosanna in the Highest, as was done for the first time by the crowd welcoming Jesus into Jerusalem.

The Gospel of Matthew (21:1-11) will be read and we will see Jesus enacting the prophecy about the coming of Zion’s ruler in Zechariah 9:9-10. “Rejoice in heart and soul….Shout with gladness daughter of Jerusalem! Look! Your ruler comes to you: victorious and triumphant, humble, riding on a donkey, on a colt, the foal of a donkey.”(TIB) The NAB translation of this verse read: “Shout for joy…See, your king shall come to you; a just savior he is, meek and riding on the foal of an ass”.   The Peshitta (Near Eastern translation from Jesus’ Aramaic) reads “…he is righteous and a Savior, lowly and riding…upon a colt, the foal of an ass”.  The fulfillment of this prophecy about the Messiah is why Jesus sent his disciples to get the colt he would ride on into Jerusalem.  To ride on a donkey in that age was more a sign of humiliation than royalty, for only the poor rode on donkeys. Royalty rode on fine horses or in transport pulled by powerful steeds.  So, here is Jesus the king of the poor and outcast, for he had loved them, healed them, taught them and won their hearts, now welcomed by them with great joy. They spread their cloaks on the ground before him and shouted “Hosanna” which means “Save” in Hebrew but is a song of praise. Matthew’s Gospel says “the whole city was stirred up” at his arrival.

The account of Jesus triumphal entry into Jerusalem is in all four Gospels. John’s Gospel (Ch 12) adds that the people recalled the raising of Lazarus and thronged around him. “Look, the whole world has gone after him! (12:19b). In Luke’s (Ch 19) account Jesus was asked by the Pharisees to quiet his disciples. He said that if they were quiet even the stones would cry out! This was a time of acclamation and joy, the universe itself was in accord. I think that the joyful shouts of acclamation filled Jesus’ heart and even for a short while he knew that despite what lied ahead, and he had already predicted that, he had accomplished his mission, the ordinary, the poor, the sick and the outcast along with his other disciples, men and women and children, knew who he was and would carry on his work. This deep knowledge and his always close Abba, Amma God (Papa, Mama) gave him the strength to face what was ahead of him.

And, then as he drew close to Jerusalem, Jesus wept for Jerusalem and the people as they did not accept the prophets before him, or him-“you did not recognize the time of God’s coming to you”- and destruction not peace would come to them.  The oppressors would win after all in Jerusalem and for this, he wept. Then, he entered the Temple and further enraged the authorities by throwing out the money changers and the sellers of animals, doves and others, for sacrifice. In essence, He set those birds and animals free and put the place where God was supposed to live back into God- perspective. God doesn’t want any form of animal or living sacrifice, God wants lives and hearts full of justice and love for everyone.   This is to be a house of prayer!  The ensuing parable of the tenants in the vineyard (Matt 21: 33-45) where the owner has to send his son because the others collecting the debt were killed and the son is also killed but the vineyard is given to other tenants, tells us what will happen next.

On Palm Sunday I like to savor the victory with Jesus.  Jesus joy was short lived because his work was not done-he kept on going with his actions and his teaching. I think the strength of the Heartfelt Hosannas propelled him on. I also think that it may well have been a different crowd that shouted “crucify him” while his loyal group of lowly folks, lowly like him, were overwhelmed by the greater powerful interests of the religious establishment and the Roman Oppressors.

The Roman Catholic Liturgy really rushes Jesus’ moments of victory as once the palms are placed down, the entire Passion is read for the Gospel. Yes, Jesus will be killed in a brutal and slow tortuous way. But even there he will make a statement of victory. When we rely on the English translations from the Greek alone we may miss this shout of victory from the Cross. In Matthew 27:46 we have Jesus saying the Aramaic words “Eli, Eli, L’mana Sabachtani.” In English that is translated “My God, My God, why hast thou forsaken me?” It is phrased as a question and is taken to mean the abandonment of God. But Aramaic scholar Rocco Errico (Let There Be Light, pp. 12-13) points out, it can also be understood as a declaration: “O God! O God To what (a purpose) You have kept me!” or “O Sustainer, O Sustainer! To what a purpose you have left me.” “Left” does not mean abandoned but it means spared to fulfill an end or destiny”. God never forsook or abandoned Jesus, and God will never forsake us.   It is a cry of “I have accomplished it” (Like the “it is finished” in other accounts). The Lamsa version of the Aramaic translates, “for this was my destiny!” In other words, in addition to the words of forgiveness and inclusion (for the thief) from the Cross we have a sense of completion of Jesus’ work -only to be topped by the resurrection! And that indeed is the conclusion of Holy week-rising from the dead!