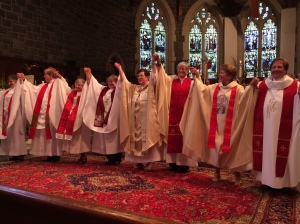 On Sunday 4/26/15 Pope Francis exhorted newly ordained priests to, I paraphrase the words of author Susan Ross, generously break open the alabaster box of the sacraments, speaking of baptism, he said “refuse no one”. We, Roman Catholic women priests are with you in freely giving the sacraments, Pope Francis. We pour the sacraments out extravagantly, as Jesus did, on all who ask.  We are pleased to hear your guidance to all priests on this sacrament of welcome and initiation into the body of Christ. I say in all humility, remember, too, Pope Francis, that through Christ and God’s mercy all of the sacraments are for all including the seven women ordained through the Sacrament of Holy Orders, on Saturday 4/25 and all Roman Catholic women priests who bestow sacraments on the people of God in the spirit you embrace in this homily.  We pray for you and for all the church as we ask God’s grace to pastor and not to manage as we serve,and are one with, the People of God.

with love and prayers, 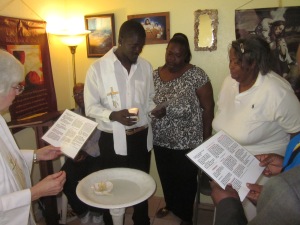 Francis: Priests should never refuse baptism to one who asks

Joshua J. McElwee  |  Apr. 27, 2015The Francis Chronicles    ncronline.com
ROME
In words that may be interpreted to rebut Catholic priests who refuse to baptize children of same-sex couples, Pope Francis has said that priests should not refuse baptism to anyone who asks for the sacrament.

Speaking in a homily Sunday for the ordination of 19 new priests for the diocese of Rome, Francis told the new ministers: “With baptism, you unite the new faithful to the People of God. It is never necessary to refuse baptism to someone who asks for it!”

The pontiff also in the homily personally pleaded that all priests be merciful when hearing confessions.

“With the sacrament of penance you forgive sins in the name of Christ and of the church,” the pope told the new priests. “And I, in name of Jesus Christ, the Lord, and of his spouse, the Holy Church, ask you to not tire of being merciful.”

“In the confessional, you will be there to forgive, not to condemn!” Francis exhorted. “Imitate the father that never tires of forgiving.”

The pope was speaking Sunday during the ordination Mass in St. Peter’s Basilica. Later in the day, Francis again called on priests and bishops around the world to think only of tending to Catholics in their care and to have no other ambitions or interests.

During remarks before the weekly noontime Sunday prayer in St. Peter’s Square, the pope said those given leadership in the church are not called to be managers but servants that imitate a Jesus who deprived himself of everything and “saved us with his mercy.”

Francis tied together his message by meditating on the role of Jesus as the “Good Pastor,” which Catholics around the world celebrated on the fourth Sunday of Easter.

Continuing, the pontiff said: “Unlike the corrupt, Christ the pastor is a thoughtful guide that participates in the life of his flock, not searching for other interests, not having other ambitions than those of guiding, feeding, protecting his sheep.”

“And all this to the highest price, that of the sacrifice of life,” said Francis.

Two of the new priests Francis ordained Sunday morning joined him at the window of the apostolic palace for the noontime Regina Coeli prayer, blessing the crowd with the pontiff.

Reflecting later during the prayer on the love of God, Francis that God’s love is the “highest and purest” because “it is not motivated from any necessity, it is not conditioned from any calculus, it is not attracted by any desire of exchange.”

But contemplating and giving thanks for that love, the pope said, is not enough.

“You need also to follow the Good Pastor,” he continued. “In particular, those who have the mission of guiding in the church — priests, bishops, popes — are called to assume not the mentality of the manager, but that of the servant in imitation of Jesus who depriving himself has saved us with his mercy.”

Later in the noontime prayer, Francis expressed his closeness to the people in Nepal who suffered a massive earthquake Saturday and then several substantial aftershocks Sunday.

At least 2,200 have been reported dead from the tremors in the Asian country.

“I wish to assure my closeness to the peoples stricken from a strong earthquake in Nepal and the bordering countries,” the pope said. “I pray for the victims, the wounded, and all those that suffer from this calamity.”

The pope expressed hope that the victims “have the support of fraternal solidarity” before leading people in the Square in recitation of the Hail Mary for all those affected.