BE Prophetic! A RC Woman Priest’s Homily for the Fourteenth Sunday in OT-July 5,2015

There are few scriptural passages that speak as cogently to the life of a prophet and priest/pastor and all who “live Christ” as the texts for Sunday do. In these we get the inside track on what the Prophet Ezekiel,the Apostle Paul and Jesus, the Christ experienced-and we ask the question: should it be any different for us?

Ezekiel was a prophet to Israel during the period of Babylonian Exile (590-571) when the people struggled with how to remain faithful to God in a foreign land with other customs and religions and endless temptations to acculturate to the status quo. They had the Law, the Torah, and other prophets to guide them, but they were lost in another land. In Ezekiel 2:1-5 we hear God calling Ezekiel into service as a prophet in a way he could not ignore.  He is lifted by God’s spirit, and we learn in later verses that he is angry and bitter to have to serve such a difficult people(2:14). God has already affirmed the difficulty of his job but does not ask for success, just for telling the people what God wants of them: “And whether they listen or not,for they are a rebellious house,they will know that a prophet has come among them”. To do that Ezekiel has to “eat God’s words” which means to deeply learn God’s words so that he can pass them on.

Let us consider that the church is functioning in a period of exile in this post-modern period when traditions (of Jesus the Christ, of the earliest church,and of the church that had value throughout the years) are lost, questioned, changed (both rightly and wrongly) and simply abandoned-and often what replaces them are unidentifiable as belonging to Christ. What does it mean to be prophetic today?   How do we “eat God’s words”, hear them, learn them and be brave enough to live them, and preach them in a “foreign land?” Today to be prophetic we must continue to live for inclusion and compassion when directives come tumbling down from local bishops that denigrate and demean others, for example, the Christians in the Gay (GLBTQ) community. Just this week a letter from Bishop Dewane of the Diocese of SW Florida was read in local churches denouncing “gay marriage”(and people who have been considered “disordered”!). When one brave older man,Hank Tessandori, stood up in the church and took on the bishop’s representative who was reading the letter he was rewarded by being stripped of all of his roles in the church including that of Eucharistic Minister so he can no longer serve at the Table of Christ in that church or for the sick and homebound. (Fortunately he also worships and serves with us and he can continue this with and for us).  He lived an Ezekiel moment and God says to him: it’s understandable if they don’t listen to you, but speak, and they will at least know a prophet has been among them. Similarly, in the wake of the recent massacre in an African-American (AME) church when nine people attending a Bible Study were killed by one man because of his hatred for blacks the very actions of the people in response were prophetic: they offered and preached forgiveness.  That is prophetic in an age filled with fear and the need for vengeance and hatred and distrust between the races. Far from “causing a race war” as the tragically misguided killer wanted, his actions united black and white and all people together in the name of Christ. Our Good Shepherd Church is one of the only truly integrated churches in Fort Myers. It may take adversity to unite people, but it also takes great love. And that is the ultimate message of the Gospel-LOVE IS STILL prophetic.  To speak against gun violence and confront the NRA as well is a prophetic act that our President Obama and many others risk themselves for.  In our community when I speak against guns and gang violence, that too is prophetic. Finally I learn, I can’t change it, but I have to speak it.

And when Pope Francis speaks prophetically about greed and climate change and poverty he is ridiculed by many: but he IS prophetic. The Roman Catholic Women Priest Movement that my co-pastor Judy Beaumont and I are a part of is also prophetic. For our faithfulness to our call, as Ezekiel was to his, and to the sacrifices we make to serve God’s precious people we are rewarded by the church with their hope that we will cut ourselves off from them and the threat that we have excommunicated ourselves (and we have not) since we break the letter of the law, Canon Law 1024 that says only men can become priests. By now there are well over two hundred of us world-wide who have responded to God’s call and received Holy Orders through the very valid line of a bishop in good standing in the Church. We are marginalized and ostracized and criticized by some,and well received by others who also feel marginalized by the elements of the church that have forgotten the love and compassion and inclusion of Christ. But we listen to the words of God to Ezekiel-don’t worry about the outcomes-just be prophetic and they they will know a prophet has been there. And so we remain as Roman Catholic and serving as priests to and with God’s people no matter what.

There are so many ways to live and speak God’s words and as God tells Ezekiel: don’t be afraid, don’t be terrified, and don’t expect success (that part is, after all, not in your hands, but God is still acting). JUST DO IT!

And Paul( 2 Corinthians 12:7-10) finds that he has to deal with his human weakness, probably both physically and emotionally and in other ways as he confronts his “thorn in the flesh” that humbles him as he engages in the most amazing missionary work to spread Christ throughout the then known world. He rationalizes that this “thorn” keeps him humble, finding some good in his pain and difficulty. But most of all he recognizes that “when I am powerless,it is then I am strong”(verse 10). When he is weak the power of Christ dwells in him (verse 9). There are times that Paul has been an enigma to me as he included the patriarchal customs of the times in his letters as “word” in stead of being more truly prophetic. Yet he also defied customs at the same time, saying , for example, that husbands and wives, men and women ,should “submit to each other”. But in our reading today I can understand him perfectly- his spirit is willing and more than able, but his flesh is weak. In what ways we are not sure, illness, other ways?  I reflect here that I am one of God’s most imperfect vessels. I wrestle with all sorts of issues, non-physical and physical.  Every week I pray that my particular physical illnesses don’t hit me on a Sunday so I can celebrate the Mass with our people. As my former blog indicates, we just got back from Colombia, South America. The whole time there I had to pray that my weak body would hold up so that I could reflect the love of God in Christ. Twice I was very sick but I did get through the visit and one of our sisters preparing for the diaconate and priesthood with RCWP, Maria Elena Sierra Sanchez, wrote afterward thanking us for visiting the Christian communities there and sharing the Christ-light as the Apostle Paul and other apostles did in the early church. It was truly the love and compassion of Maria Elena and our caring and dynamic priest, Marina Teresa Sanchez Mejia that got me and Judy B.  through the tough times. “Tranquila, calmate” they said, “descansa-todo sera bien”  (Take it easy, be calm and rest a while, all will be well”) and it was. It was more than well. When I was weak and powerless, I was strong in the power of Christ. And that happens for me all the time-until finally, like Paul, I am content with weakness.  “So I am content with weakness,with mistreatment,with distress,with persecutions and difficulties for the sake of Christ; when I am powerless, it is then I am strong”(verse 10, TIB). This is to all of my courageous and prophetic sister Roman Catholic women Priests: when we are actively prophetic and face all kinds of difficulties, when we are powerless, then Christ in us shines forth, and we ARE strong. 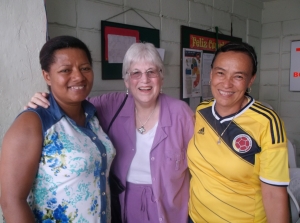 And finally the Gospel (Mark 6:1-6) is very clear: Jesus was without power in his own community. “A prophet is without honor in his home town…”(verse 4). Indeed, while we as women priests may not have power in the Roman Church, we , like Paul, are strong as Christ lives and shines forth in us. Jesus did not knock himself out where he was not accepted, instead he “made the rounds of the neighboring villages instead,and spent the time teaching”(verse 6 TIB). And so we too,all of us who are outside of what seems to be the power structure,  go on teaching and being prophetic.  When we are weak, the power of Christ dwells in us!

One response to “BE Prophetic! A RC Woman Priest’s Homily for the Fourteenth Sunday in OT-July 5,2015”