This is  today’s CNN article by Carol Costello.  And my response is open your eyes dear friend, Carol, we are already here. There are almost 210 validly ordained Roman Catholic women priests in the world and more are prepared every minute. Go to our website romancatholicwomenpriests.org and meet us. Look up our ministries, ours is goodshepmin.org ,and see us at work. We are here, now. And you are invited to see us ordained in our future ordinations so your dream can come true. Ah, if you are waiting for the Pope’s blessing on it, you may have to wait a little longer. We pray that Pope Francis who has welcomed the outcast back in will welcome his women priests and realize that we are very much alive and serving all over the world, but we are not holding our breath until that happens. We are simply going on serving God’s people especially the poorest and the outcast sacramentally and with all our hearts. It is what we are called to do. 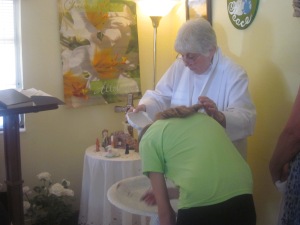 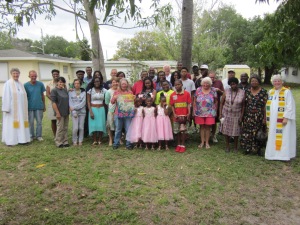 Carol Costello: I will not see a woman ordained a Catholic priest in my lifetime
The number of American Catholics will decline more rapidly if Pope Francis doesn’t do more for women

Carol Costello, who anchors the 9 a.m. to 11 a.m. ET edition of CNN’s “Newsroom” each weekday, is writing a series of columns related to Pope Francis’ visit to North America this month. The opinions expressed in this commentary are hers.

(CNN)I will not see a woman ordained a Catholic priest in my lifetime.

I don’t agree with it, but I heard Pope Francis when he said the issue of female priests is “closed.”

Traditions die slowly, but so can great religions. And, I posture, as a Catholic woman, that in the not-so-distant-future the number of American Catholics will dwindle ever more rapidly if Pope Francis does not follow through, in some way, with what sounded like a promise.

His words blew my mind. But then came a series of baffling statements from the Pope. In 2013 he told a group of nuns, “The consecrated woman is a mother, must be a mother and not an old maid (i.e., spinster). …” In 2014, he told the European parliament, “Europe … is now a ‘grandmother,’ no longer fertile and vibrant. …” And, in December of last year, the Pope told a group of female theologians they were, “strawberries on the cake.”
Perhaps Pope Francis was simply talking like most 77-year-old men. But words matter. And deeds matter even more.

As Kathleen Cummings, director of the Cushwa Center at the University of Notre Dame, told me, “We’ve been good soldiers, but this generation of women — not so much.”

According to a 2014 Pew Research study, just 16% of American women between 18 and 29 identify as Catholic. The low percentage is troubling enough, but Cummings puts the numbers into stark perspective. “For the first time in history, young Catholic women are more disengaged than their male counterparts,” she told me. “That is a huge, important shift. If you don’t have women, you lose the children.”
In other words, a sizable number of those young mothers the Pope cherishes do not consider themselves or their daughters “strawberries on the cake.” They are the cake. And, until that sentiment fades completely, those young mothers will not instill their Catholic faith in their sons — and especially NOT in their daughters.

Today’s women are growing up in a world, Cummings says, “where all doors are open to them and the Catholic Church is still closed.”

That’s not to say the door to the priesthood should be opened immediately, but it would be helpful if the Vatican learned to effectively talk about — and partner with — women.

Hear me out: If priests married, the number of women who could, at the very least, rub elbows with the Church’s hierarchy would increase immediately.

I say that because so few women do. According to Vatican Radio, just 18% of the Vatican’s workforce is female. Keep in mind that workforce includes Vatican museums, post offices, and the Holy See that governs the Roman Catholic Church.

If priests had wives, those numbers would most certainly increase. At the very least, the mere presence of women would force Church leaders to relate to them in a more natural way.

Here’s another idea: Loudly trumpet what Catholic women have accomplished in a world that is often inhospitable to female achievement.

Allow me to regale you.

The Vatican, at the Pope’s urging, appointed a committee to combat sex abuse in the Catholic Church. Roughly half of that 17-member committee is made up of women, including Marie Collins.

When I asked Collins if she was surprised by the Vatican’s request to serve, she laughingly told me, “You could say that.” Then, she added seriously, “They said, we are calling from the Vatican, they were ringing on behalf of the Holy Father, they asked if I would accept it — I didn’t believe it at first, it was difficult to be sure if this was real.”

Collins was not skeptical just because she is a woman, but because she was raped by a hospital chaplain — a priest — when she was 14 years old. She is now working to convince the Vatican that transparency and criminal charges are the only effective and moral ways to deal with those who abuse children.

Collins is the first to admit the Catholic Church has a long way to go before it “gets it right,” but the fact the Vatican is allowing her — a woman wronged by the Church — to speak on its behalf is something the Vatican ought to proclaim loudly.
There are other powerful women who serve the Church as well. Sister Donna Markham is the first female president of Catholic Charities in its 105-year history. Keep in mind, Catholic Charities is an organization that supports more than 70,000 employees — and serves 10 million people in need across the United States. Markham’s organization is also in charge of lobbying on Capitol Hill.

“I certainly knew I wasn’t selected to be president of Catholic Charities because I was a woman. I think I was asked to do it because people trusted my ability,” Markham told me. “Now, is it thrilling to me that, in this day and age, we can see the page turn a bit and see women called to exercise leadership in our church in some very important ways? That is thrilling to me. But, I stand with other women who do that. Not just Catholic Charities.”

Perhaps the Pope will extoll the accomplishments of these amazing women during his visit to the United States and spare us the “strawberries on the cake” comments.

And here’s an idea, courtesy of Kathleen Cummings. The Pope could announce a standing Vatican commission on women in the church. A small thing, perhaps, but a strong signal that Pope Francis is serious when he says women are more important than bishops and priests.