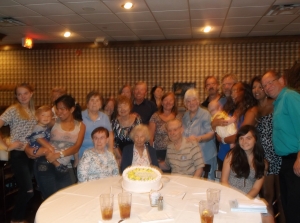 Our Scripture readings for this Sunday are wonderfully deep about love and relationship. They are about God’s love and the love of family including our church families and those we make for ourselves. If we don’t get stuck in literalism and we understand language and cultural context we understand that these are some of the most important lessons in the Scriptures, and we are so thankful for them.

The first reading is Genesis 2:18-24 where the first thing we learn is that it is not good to be alone so God created companionship of a like sort for us. God also created animals and birds as companions on this earth but the companions of like sort would meet a need within us that other loving creatures could not meet. This week there was a terrible case in nearby Cape Coral , Florida  of a teenager tormenting and abusing small pet dogs that went viral online. By now he has been apprehended but what will fix this tortured young soul that thought it funny to torture other living beings? Similarly this State of Florida is big on killing any animal deemed a pest. Most little lakes here had funny and beautiful, in their own way, muscovy ducks a few years back. Then people complained of duck waste and were allowed to shoot them. Soon almost all were gone to the dismay of those who love and enjoy all creatures, as God intended. Now they are returning and we pray for no further permission to mass killing. Bears are now also on the “shoot them” list despite the outcries of many.  There is time for one more appeal on this. We have taken their habitats and left them only garbage but when they “steal it” and make a mess or scare someone the instinct is to kill them. This is not what God intended when God provided for animals asked Adam (the human being) to name them .  God who is Love intended care, but “dominion over them” KJV words meant for many an awful domination instead of caring for.

There are many translations of God bringing humans into being. But there is one interpretation by the great African American poet and writer James Weldon Johnson in his poem The Creation that shows deeper spiritual  understanding than some of the translations.  God is clearly a being with deep feelings to the poet: ( I am using ‘God’ where the poet would use either God or he.): “Then God walked around/And God looked around/On all that God had made. God looked at God’s sun/God looked at God’s moon/And God looked at God’s little stars.; /God looked on God’s world/With all its living things, And God said: I’m lonely still”. So God bent down and from the earth, “like a mammy bending over her baby,/ Kneeled down in the dust/Toiling over a lump of clay/Til God shaped it in God’s own image…” and human beings came into life.  While the poet of his times, the 1920’s, saw God as “he”, Johnson also saw God like a mother bending over her child. It is a tender and  loving feminine image of God along with the masculine image of sculpting the clay. Johnson saw God as loving and lonely for companionship from the universe. That is good theology that prevails even today.  In short, the cosmos was created in love and for love. Last week in his USA visit Pope Francis spoke to families. He told a story of a child asking a priest what God did before God created the earth and all that is in and around it. The priest was stumped and thought-then he said “God was busy loving for that is Who God is, Love”. What a great answer. Whether we come from clay or stardust or a big bang-we were created, along with all of the cosmos, in love. And God is still here loving us and drawing us close.

Why then do we have so much trouble with love? Many stories in the Bible address this- like Cain and Abel and the twelve brothers and Joseph that illustrate the worst effects of sibling rivalry or the story of Ruth and Naomi that illustrates the love of a daughter-in-law for her mother-in-law-so usually not an easy relationship. But Ruth’s story is a beautiful story of love for one woman for another. Just as the story of David and Jonathan is a beautiful story of male friends. And God incarnate, Jesus, was born as a baby into a human family-how precious and important that makes families. And the Gospel is the story of God’s love and Jesus’ love for all of his brothers, sisters and friends , for that is what he calls us. Love is for husbands and wives and families and extended families of all sorts, families headed by two parents, mothers and fathers, and two women or two men or one grandmother or father or mother or grandparent or aunt or foster or adoptive parent, and friends and tribes and neighborhoods and communities and for the church. In the Letter to the Hebrews we read that Jesus was not ashamed to call all of us brothers and sisters. Wow! We are thereby grafted into God’s very family. 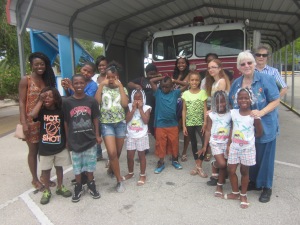 Pope Francis’ coming to the conclave on the human family further gave families dignity and immeasurable worth. However, it was used by those who are opposed to gay marriage as a bludgeon against two of the same sex joining forever in holy union. I fail to understand how this provision for companionship, joy and stability in relationship of others would undermine the traditional family. Gayness is not a chosen state so that people are being drawn away from traditional marriages into gay marriage. Living a life of rejection and stigma that still exists even in many American families and cultures is not an appealing choice unless that is the choice you are born with to love another like yourself.  The alleged meeting of Pope Francis with the woman, Kim Davis, an elected Kentucky City Clerk, who would not sign marriage certificates of gays was a painful rebuke for people who love each other and plan to live together always. Yet, Pope Francis also met “secretly” with a gay male couple of 19 years and their friends (one of the Pope’s former students and his partner) before meeting with her (See Bondings 2.0- newlifeministriesblog and USA Today 10/3/15) . We cannot simply dismiss Pope Francis in his complexity even when he does not do exactly what we who believe in love and inclusion as he does think he should do, and even when we too, as members of the LGBTQ community or as women priests may want his blessings and the opening of doors now.

Jesus addresses the question of divorce in today’s Gospel. Read without cultural and language understanding this made for rigid church rules about divorce. But in context of Jewish Law and his times and language, men sometimes simply threw away their wives and took another wife. In doing so they were following popular culture but not Jewish Law about having  giving a bill of divorcement so she and he could marry again. Jesus is saying at least honor the bill of divorcement but better still don’t just throw wives away like inanimate objects you don’t want anymore with or without papers. Go even beyond the law on giving a bill of divorcement- make it work!  Marriage is a holy union of two-don’t loosely undo what God has blessed as one. If a woman was thrown away without the bill of divorcement she was in limbo, she could not even marry, while the man could. Jesus is speaking up for the dignity and equality of women, he is charging men with greater responsibility to live in love and not to follow cultural prescriptions that take all women’s rights away. 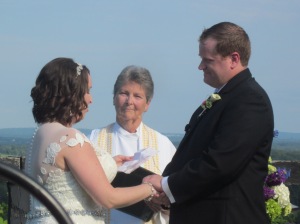 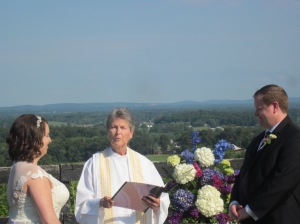 Brothers and sisters, God who is love has made others for us to love. God who is Love has made provision for all to be loved.God who is love has made us able to love God and be in relationship with our loving God. We need never feel unloved or alone, God is with us in love. And we thank God for all forms of family and friends, for biological families and for chosen families and for the inclusion of animals as loving companions. Let us then celebrate the message of this Sunday: let us celebrate the sacredness of love in all its forms and let us remember in today’s words: When we express our love to God in our worship and in our everyday lives, God’s message is “I love you more”. Thank you God for all the love in our lives and thank you most of all for your love! Amen!