What is your response to awareness of the presence of the living God? When something happens to make you consider God’s holy presence and what God wants of you, how do you feel and how do you respond? I give some of my own thoughts and responses here along with the perceptive homily of Rev. Beverly Bingle of Toledo, Ohio.  These are for your prayerful consideration:

First we see the prophet Isaiah reflecting on a dream he had in which he senses/sees the awesome holiness of God. He responds that he is “doomed”– he does not belong in the presence of the Holy of Holies as he is a “Man of unclean lips, living among a people of unclean lips” and yet he has seen “the King, the Lord of Hosts/ the Ruler, YHWH omnipotent”.

The Psalmist responds with deep heartfelt thanks for God’s kindness and asks that God not forsake “the works of God’s hands”.

Paul describes himself as “the least of the apostles” not fit to be called an apostle because he persecuted the church, and he describes how hard he worked, with God’s grace, to spread the gospel.

And, in Luke’s Gospel, Jesus is teaching the great crowds near the shore, sitting in Peter’s boat.  When he is finished he tells Simon (Peter) to go out “into the deep water and lower the nets for a catch”. Simon has already tried that and was putting the boat away for the night when Jesus chose get in it to teach at a little distance from the crowd.  So he said to Jesus (we did that already to no avail, but) “at your command I will lower the nets.”  When the nets were filled beyond belief Peter was in awe and knew that Jesus was no ordinary man or prophet and said, as Isaiah did, “Leave me, for I am a sinner”.

Jesus said to him “Do not be afraid; from now on you will fish among human kind. “ Then Simon and his partners James and John brought their boats ashore and left everything and followed Jesus.

In each of these scriptures the human response to God’s holiness, Presence, and power is first a sense of sinfulness, of not measuring up, of not being fit to be in God’s intimate presence and not worthy of the call to follow. And in each case God continues to call and accept the gift of those that are called.  Then, as in the case of Isaiah, God cleanses/heals Isaiah’s unclean lips and calls him forth. Now Isaiah, cleansed, can accept the call: “Here I am send me”.

I know well these very human and understandable responses. They were, and sometimes are still, my own responses as well.  I still say to God, “what on earth do you want of me with all of my faults? Dear God, you know me so well, how can you send me?” I know my own sinfulness and limitations as the prophets and disciples knew theirs.  I sometimes still say to God, “I am not worthy of the call, and I am not worthy of the priesthood”. Fortunately, as God shows in the call of Peter and Paul and Isaiah, my worthiness is not required. (And, in fact, I am worthy because of Christ, even when I don’t believe it or feel that way!)  God asks only that I do as Peter did, even in moments of disbelief-do what I am asked to do. Then,as I separate myself from what may hold me back including my own sense of unworthiness, I can join the great company of people with many human frailties that God uses to answer the prayers of others, and to serve “the least of these”, God’s people.

Something beautiful happened this week: a woman prayed and prayed and Pastor Judy Beaumont and I and our ministry were used by God to answer her prayer.  Within the last two years, ‘Peg’, a newly widowed older woman, lost her job and had to live with one of her children whose spouse could not tolerate her. Seeing the spouses fight over her was very painful and one day she left and having nowhere else to go lived in the woods. She was actually able to make a go of this hard life for ten months and did not complain. She told those who asked her that she prayed every night that God would protect her and help her to live, and God has done this. She asked God’s blessings on all who were kind to her. She read her Bible but felt her clothes were not good enough to go to a church. Also she was disillusioned with the church, but full of faith in a loving God. Her sweet and upbeat spirit attracted many natural helpers to her who gave her what it took to survive outside until she got her own Social Security check-not an amount that facilitated housing in this pricy area. An influx of rough men, the recent heavy rains and threats of tornados and also a coyote in the woods brought new pressures upon her.  A  cat came to her little tent and soon they were best friends. When the cat took ill she took it to the Vet in the nearby plaza, Dr. Terry Sutton who is also our wonderful Vet. Dr. Sutton treated the cat and with Peg’s permission told us about Peg. Before I even called Peg on the cell phone to set up a meeting Pastor Judy B. recognized her on the plaza from Dr. Terry’s description and engaged her.  I then came the next day and learned her story. Next we filled out an application for Senior Housing with her. But most of all we prayed that we would have an empty room behind the church, then filled with two men and a dog, so that she could live there until her Senior Housing was available. A day later one of the men called and said that he had saved enough to get a studio apartment and had moved out! Now Peg and her kitty had a home! She was ecstatic and was able to gather her belongings in two days and move in-just ahead of unseasonably cold, windy and rainy weather! She has attended a midweek meeting at the church and feels right at home. Her gratitude and joy is infectious and gives us new life. She said that we were her answer to prayer but we feel that she was an answer to our prayers, an affirmation of our call.

How amazing it is to be an answer to prayer when feeling the full weight of our own imperfections. God used us despite our failures and human frailties. How awesome is our loving God!

(Peg and I sit on the plaza and fill out an application for Senior housing. )

(Below on the right is Peg at church with two of our leaders, Brenda and Gary.) 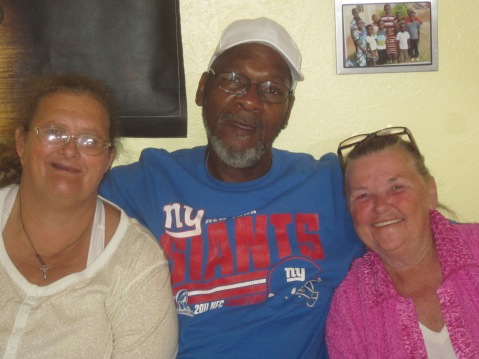 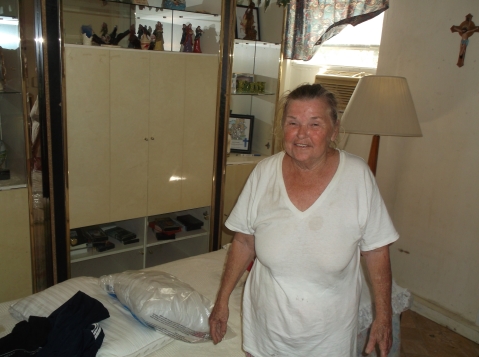 Peg moving into her new room with great joy. Thanks be to God!

saw Jesus rejected by the people of his home town,

with its population of 400,
and heading down to Capernaum,
with its population of 1,500.
Capernaum is about 20 miles away from Nazareth—
an easy day’s walk.
In passages read on weekdays,
Luke has Jesus exorcising a demon in the synagogue,
curing Simon’s mother-in-law of a fever,
and healing people sick with various diseases.
Then Jesus goes off to a deserted place,
but people follow him
and try to convince him to stay in Capernaum.
Instead he heads off to spread the good news
to the other towns of Judea,
and that’s where today’s Gospel passage picks up.
Luke says Jesus is standing by Lake Gennesaret,
the freshwater lake
that’s called the Sea of Galilee by the other evangelists,
not quite four miles from Capernaum,
a little more than an hour’s walk away.
__________________________________________
A crowd has gathered by the lake to hear Jesus.
So he hops into Simon’s boat and sits down—
the posture of the teacher in the Jewish tradition.
The miraculous catch of fish follows his teaching,
Luke’s version of an event
that most scholars think
in some form or another
actually happened.
Mark and Matthew give the bare information
that Jesus told the disciples
they would be catching people instead of fish.
Luke expands the story
into the big catch and the call of the disciples.
John puts the catch after the resurrection, on the beach,
as a story of call to discipleship and sending on mission.
__________________________________________
All four of the Gospels give evidence
that Jesus talked about fish a lot,
and he ate a lot of them,
and he passed them out to lots of people.
Many of the towns he walked to—
Capernaum, Bethsaida, Caesarea Philipi, Chorazin,
Scythopolis and Hippos in the Decapolis,
Jericho, Tyre, Sidon—
were on rivers, lakes, or the Mediterranean Sea.
__________________________________________
By the time of this event,
Simon Peter would already have experienced Jesus
as an extraordinary person
through his experience of the teaching in the synagogue
and the exorcism
and the healing miracles.
The giant catch of fish puts Peter over the edge—
he leaves everything and follows Jesus.
People would have remembered
Peter talking about that important moment over the years.
People also remembered that Peter was not perfect.
He was an ordinary human being.
He worked hard as a business partner with James and John.
He was not part of the ruling class but one of the ruled
and would have, along with other Galilean Jews of the time,
chafed under Roman oppression.
He was impetuous,
sometimes mistaken,
prone to misunderstanding what Jesus was saying.
But more than anything,
people remembered that Peter’s encounter with Jesus
dramatically changed his life.
__________________________________________
In that same way,
our life experiences change us.
At some point we are compelled to change,
perhaps to follow the dream, like Isaiah;
or to see more clearly, like Paul;
or to leave a job, like Peter.
We remember a point
when we made an important choice.
And it happens to us
not just once
but over and over.
We are called.
__________________________________________
Most of the calls we get are little ones,
choices we make almost automatically,
like smiling at a stranger
or helping a grandchild with homework.
They’re like the call Peter got
to let his friend Jesus hop in his boat
and put out a short distance from the shore.
He could have said no
and kept on washing the nets.
And some of the calls are big ones,
like Peter’s leaving everything behind and following Jesus.
We might answer a call to learn
that sends us off to college,
or a call to marriage and family,
a call to leave a well-paying job for a more meaningful one,
a call to volunteer for justice and peace.
Sometimes we misunderstand,
stumbling along the way like Peter did,
and take the wrong way for a while.
Then, like Peter, we turn ourselves around.
__________________________________________
By the way we live,
by the choices we make in each circumstance,
our actions teach the Way of Jesus.
We are called to be disciples.
We become followers of the Way.
We become fishers of people.

Blessings to all as you find yourselves in the Presence of our loving God who asks you to follow.