“Then let us celebrate with a feast, because this child of mine was dead ,and has come to life again;was lost and has been found…” Luke 15:23-24

This parable of our loving God’s parental love and forgiveness is a favorite with our Good Shepherd Inclusive Catholic Church in Fort Myers, Florida.  Our resident artist Hank Tessandori has two paintings adorning our walls showing the welcome home.  All of us from preacher down to smallest child resonate with that loving welcome. We are a congregation of sinners and outcast people who celebrate our return home and redemption. Our people have hit bottom in so many ways, living without financial resources, homeless, outside, and desperate. Some have experienced addictions and others mental illness; some have experienced and some have perpetrated failed relationships, abuse, violence and the loss of children. Some have tried so hard to work and enter the mainstream only to be met with serious illness, aging and the lack of work. Some live with being different as members of the LGBTQ community and  and know well that human families and some churches  are often not as welcoming as our loving God is.  Some have lost all that meant anything to them and have their own version of wallowing with the pigs.  And yet,for most, the experience of returning home to be welcomed without reservation is the cause for daily celebration. Ours is a church of welcome home.  Week after week there is testimony to what inclusion finally feels like, and it feels like coming home. Brenda and Pat, Roger and Gary and Nate and so many others still weep and thank God that they now have a home; yes, they mean a place to live of their very own, but they also mean a church home. Our people, young and old, poor and well off, mainstream and outcast call us,  simply, ‘home’. And so it is that today’s Lucan Gospel lifts us up and gives us courage to continue on. We thank God for coming alive again and for our welcome home, for finding and being found, for love and inclusion, no matter what. 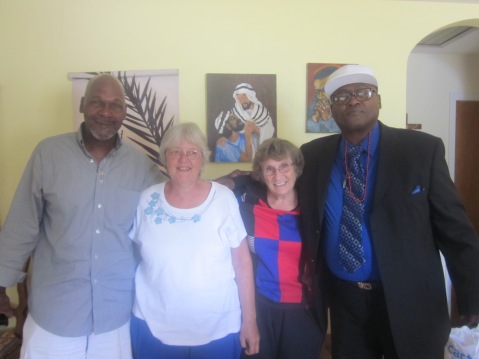 Below we read the Parable of the Prodigal Daughter by Rev. Morag Liebert, a Roman Catholic Woman Priest in Scotland.   It is exciting to change the prodigal son into the prodigal daughter and to join Morag in dreaming of such welcome.  It also reminds us that this parable is sometimes called the parable of the Prodigal Father, who is repenting of whatever he has done to alienate his child and waiting for the opportunity to welcome the child home and do things differently.

A man had a son and a daughter.  The son worked with his father on the family farm.  Certainly he worked very hard, but he shared in the making of decisions about the running of the farm, its buildings, and the people, who lived and worked there.  He also shared in the teaching of the farm workers and household servants.    The daughter also worked very hard on her father’s farm.  She cleaned, cooked and served meals, made clothes and did the mending, cared for the old, and the ill, and sometimes also worked in the fields.  But she had no say in any of the decisions that were made! Indeed she was rarely consulted about anything!  Her father and brother, and sometimes her mother too, simply took her for granted.  She rarely complained, or protested, but if they ever did pay any attention to her, it was only to denigrate her and make the situation worse.

One day she decided, she had had enough!  She asked her father for her share of the inheritance.  Her father was extremely annoyed and anxious about her request, but she insisted, so he gave his daughter her share of his property.  The daughter promptly packed her possessions and left home.  She travelled to a great city and spent her money studying with the best scholars and Rabbis.  She worked very hard and became a respected, knowledgeable scholar.  Eventually she was consecrated as a priest in a synagogue of the Diaspora and people came to hear her preach and teach.

Meanwhile, there were more problems on the family farm.  Her mother had died, her brother’s wife had divorced him for domestic abuse and finally the housemaids had left to work for the farmer across the road, who was much more ethical and considerate in his attitudes.  He paid them decent wages and treated them much better.   The farmhouse was now in a state of crisis! The kitchen was in chaos and there was no food in the pantry.  What was worse, everyone far and wide was talking about them! And needless to say, news of the daughter’s academic and professional success had reached the farm.  Eventually, the father and brother came to realise that they would simply have to change their attitudes and take drastic action.

So the father packed the saddlebags of a donkey with what he needed for the journey and travelled to the town where his daughter lived.  On the way he contemplated about what he would say to her, and decided that he would say, “Daughter, I have sinned against heaven and before you.  I am no longer worthy to be called your father:  treat me like one of your students.”  However, the daughter saw him in the distance and ran to greet him.  The father made his confession and she flung her arms around him and kissed him.  The daughter forgave him and agreed to return home with him.

After they arrived at the farmhouse, all the farm workers and neighbours gathered in its great kitchen and prepared a feast to celebrate the daughter’s home coming.  Her father presented her with a set of the best priestly vestments and sat her beside him at the head of the table, where she presided over the Passover feast and the local people asked her to be the priest at their synagogue, which had not had a rabbi or a priest for several years.  So they spent the evening feasting and rejoicing, because the daughter, who had been oppressed and rejected, had been brought home and given dignity and equality.

And here is an excerpted and pointed variation on the theme of the Prodigal Daughter by Rev. Annie Watson, ARCWP (From Bridgetmary’sblogspot)

Personally, I have experienced this inequality of grace in my involvement in the Roman Catholic Women’s Priest movement. We all know how the men have been treated in the Church’s hierarchy and priesthood.

The robe, ring, sandals, and fatted calves are readily available in the church for any male who hears the call of God to the priesthood. None of that is available for women who receive the same call in their lives.

Furthermore, we know that the men can fall into “dissolute living” in all sorts of ways—the pedophile scandal being just one example—and the male bishops will meet them while they are still far off with hugs and kisses. Women, on the other hand, who aspire to be priests, are considered worse than pedophiles because we are excommunicated and the male priests are not.

Again, it is appropriate to celebrate the father’s love, compassion, and forgiveness in Jesus’ parable of the prodigal son. And yet, when will we be able to tell the same stories about women? 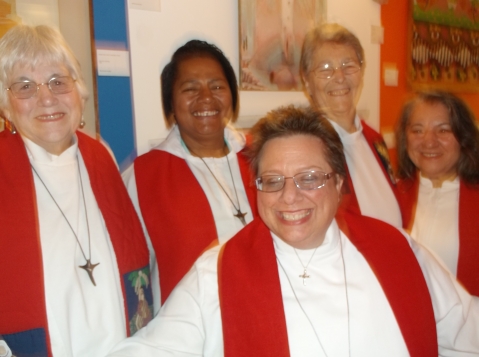 And here is the insightful homily of Rev. Dr. Beverly Bingle of Toledo,Ohio.

You may have noticed that today‘s Gospel reading

starts with three verses at the beginning of Chapter 15

and then skips a ways
to pick up at verse 11 with the parable of the prodigal son.
Luke frames the whole chapter
as Jesus’ response to the Pharisees and scribes
who are complaining because he eats with sinners,
and today‘s passage
is one of three very familiar parables there.
In addition to the prodigal son story,
Luke has Jesus tell the story of the shepherd
leaving the flock of 99
and going in search of that one wandering sheep,
and then the story of the woman searching all over the house
until she finds that one coin of the ten that she had lost.
In each of these three stories what was lost is restored,
what was out of place is back where it belongs,
whether it’s through a shepherd’s care,
a woman’s perseverance,
or a parent’s love.
Even though Luke puts these parables together
in order to further his narrative,
scholars are fairly certain that all three go back to Jesus,
just as they have little doubt
that Jesus was criticized
for sharing meals with outcasts and the poor.
__________________________________________
When people get to be as old as I am,
we can look back over our lives and find ourselves
in every character in today‘s Gospel parable.
Been there, done that.
I’ve been the one who pointed a finger
at the kind of people someone chose as friends,
like those Pharisees and scribes did.
I’ve been the ungrateful child,
like the younger son.
I’ve been the despairing worker,
scrabbling to make a pittance at a job I hated,
wishing I could go back home again.
And I’ve been the one
who was hurt and angry
about the favorable treatment
of those who didn’t work as hard as I did,
like the older son.
__________________________________________
On the other hand,
from time to time I’ve tried to be the one who forgives,
no matter what,
like the loving father in that parable.
But not very often.
And I’ve even tried to be the one who points out injustice,
like Jesus did.
But again, not very often, and not often enough.
__________________________________________
St. Paul reminds us, in that second reading,
that we who are in Christ
are called to be ambassadors of reconciliation.
I find the etymology of that word ambassador noteworthy.
It comes to us from Middle English through Old French,
based on two Latin usages meaning mission and servant.
Literally, we who are ambassadors of Christ
are servants sent on a mission
with a message of love and mercy.
We are called to welcome the wayward
just as the prodigal son is welcomed.
__________________________________________
Sometimes we are able to do that.
But, we know, sometimes it’s just not possible,
as in trying to reconcile a relationship with an abusive partner
who will not admit the problem or seek help.
When we are able to reach out in mercy and love,
we become, as Paul puts it,
messengers of God’s own righteousness,
of God’s own justice.
That’s when we carry the very holiness of God to the world.
__________________________________________
It’s a big job,
but we aren’t alone.
Just as the ancient Israelites
walked through the desert nourished by manna from God,
so do we walk through each week
surrounded by, uplifted by,
God’s presence in our world.
Sometimes we travel through a desert,
subsisting on the promise that God is with us
even though we feel alone and abandoned.
Sometimes we find ourselves resting in that promise,
surrounded by all the gracious gifts of God.
And on the weekends
we gather to celebrate the very holiness of our lives.
Through it all—
whether we’ve been stumbling through in a desert
or renewing ourselves in an oasis—
we walk in communion with God and with each other.
Thanks be to God!

THANKS BE TO GOD FOR WELCOMING US ALL HOME !