This is a lovely story of one of the members of RCWP-East , Rev. Eda Lorello who is visiting family in Billings, Montana, Eda, 83  is a priest  of such depth, compassion and dedication that she is an inspiration to us all. In the picture below taken on an Annual retreat last October, Rev. Eda Lorello is on the left with our Priest from South America, Rev. Marina teresa Sanchez Mejia on her right. 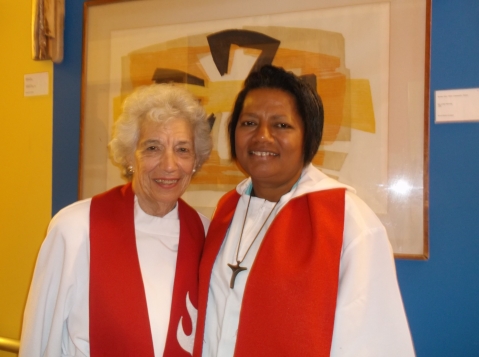 A Woman’s Lifelong Journey to the Priesthood

The Rev. Eda Lorello is among a tiny minority of Roman Catholic women who have been ordained as priests.

The 2013 ceremony was performed through Roman Catholic Womenpriests, an international movement of women who have been ordained in defiance of canon law, at the risk of excommunication.

On Thursday evening, she will host a screening of “Pink Smoke over the Vatican,” a 2011 documentary about Catholic women who have been ordained. And she will participate in a Q&A with her audience.

Lorello has never been one to shy away from living out her convictions. The lifelong Catholic partially credits that to her parents.

“My mother taught me prayer, my father taught me justice, and both (attributes) have been extremely helpful in my life,” Lorello said Wednesday in a telephone interview from her home in Long Island, N.Y.

Lorello, who has been a peace activist, has engaged in civil disobedience. But she’s always seen that as a final option.

“I didn’t get up and say ‘I think I’ll be arrested today,’” she said. “That’s a last resort, otherwise it contributes to the violence you’re trying to prevent.”

Lorello, 83, has master’s degrees in theology and pastoral counseling. Both aided her in her lay parish ministry over the years.

Much of her work was in adult formation, at one church teaching precepts of the faith, especially in the aftermath of Vatican II. Then she moved to another parish and took on other roles, “but mostly in the teaching area.”

She earned a certification in spiritual direction and another as a midlife/long-life directions consultant.

“I did workshops on personal and spiritual growth in midlife and beyond not only locally but in other states,” Lorello said. “I even went to Ireland.”

Lorello, the mother of seven, has nine grandchildren, one great-grandson and another great-grandchild on the way. She never felt pulled toward the more traditional path for women — becoming a nun.

Lorello has many friends in different religious orders who are dedicated to their work, for whom she has tremendous respect. But it wasn’t for her.

“My call centered on bread, wine, oil and water,” Lorello said. “And those are the sacramental elements.”

The desire first arose in childhood. She struggled for a time not because of the call, but “I had doubt if this what God wanted me to do.”

Lorello put the thought aside during her teenage years. The turning point came while she was in college and she was given “The Seven Storey Mountain,” an autobiography by Thomas Merton, a Catholic monk.

The book focused on his journey through life in search of a faith, his conversion to Catholicism and his acceptance into the Trappist order. As Lorello read it, the book touched her soul on a very personal level.

And even though she never met Merton, who died in 1968, through his writings he became her mentor. It was after a visit to the Abbey of Gethsemani, where Merton lived, that Lorello finally knew the course she should take.

“It convinced me that my call was indeed a call from God for the priesthood,” she said.

Lorello called Roman Catholic Womenpriests and asked for an application, which she promptly put into a drawer. A year later, she submitted the paperwork, and she was ordained in 2013.

“Ecclesiastically, that’s an unjust law,” she said. “According to Martin Luther King Jr. and Gandhi, an unjust law is no law.”

Lorello knew that her actions meant she would no longer be allowed to work in a Catholic parish. But she viewed the choice as a different kind of civil disobedience, a last option.

“I’ve waited through five popes and I’m going to be ordained as a last resort, to do the sacramental work I was called to do,” Lorello said.

She is among the more than 200 women who have been ordained since 2002.

She was pleased that Pope Francis recently called for the creation of a commission to study the possibility of allowing women to serve as deacons in the Catholic Church. It is uncertain what that study will conclude, but Lorello views it as a positive step.

“I won’t see it in my lifetime, the church ordaining women,” she said. “But it’s going to come, and this is a step in that direction.”