This exciting article is from CBC News/Canada- January 11,2017

(The ordinations ARE valid meaning that a male bishop in apostolic succession and good standing with the Church  ordained our first women priests and bishops. It is illicit as it breaks man-made canon law 1028 that says only men can be ordained. As Roman Catholic Women Priests we minister sacramentally as servant priests and serve in many ways and in many countries, numbering more than 230 ordained) and we do not accept ex-communication as we know that  nothing can separate us from the love of Christ. )

‘I have to do this’: Why some Catholic women are defying Church doctrine and becoming priests

The movement to ordain women is small, but its members’ conviction is firm 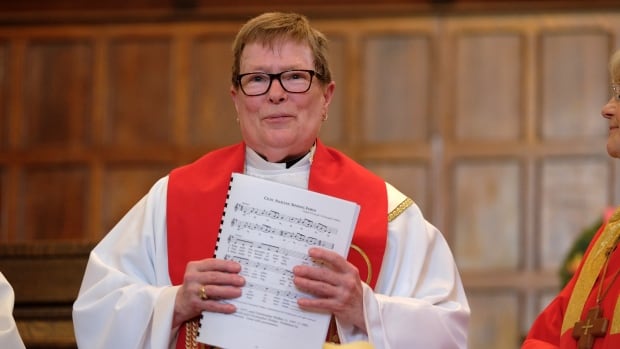 Pat Cook, 70, is part of a small movement of women who have been ordained as Catholic women priests. Her ordination, which was held a United Church in Toronto, is not

The curtains are drawn as Marie Bouclin transforms the wooden coffee table in her modest living room in Sudbury, Ont., into an altar, lighting candles and filling a chalice with red wine.

A dozen of her parishioners sit in a semicircle around her. One woman is so worried she might be identified, she asks CBC to blur her face in any photos.

Bouclin, one of only two Canadian bishops in a small movement of Roman Catholic women being ordained outside the official Church, leads the room in a service that goes against 2,000 years of Catholic tradition and doctrine.

“In the early Church, people gathered in their homes,” Bouclin says. “Who can say that what we’re doing is not valid? Sometimes, we have to obey God and not men. And as much as some Catholics don’t want to hear this, the Pope is not God.” 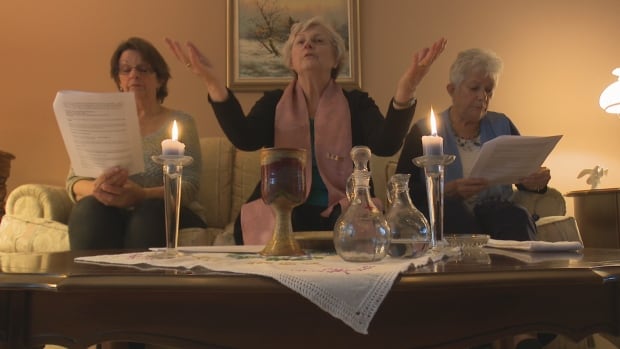 Marie Bouclin, 75, centre, is one of only two Canadian bishops in the Roman Catholic female priest movement. There are 182 ordained female priests and 16 bishops worldwide. (Leonardo Palleja/CBC )

Bouclin, 75, became a nun when she was 18, but after seven years, she decided to leave the convent to get married and raise three children. She obtained a Master’s degree in theology from the University of Sherbrooke, focusing on the study of women who had been abused by clergy.

That led Bouclin to begin working with an organization called Women’s Ordination Worldwide. In 2007, she became a priest herself, and in 2011, she was elected by the other priests in the women’s ordination movement in Canada to serve as their bishop.

Bouclin is a self-described heretic.

“A heretic is someone who thinks differently,” she says. “So, yes, I suppose I am.” 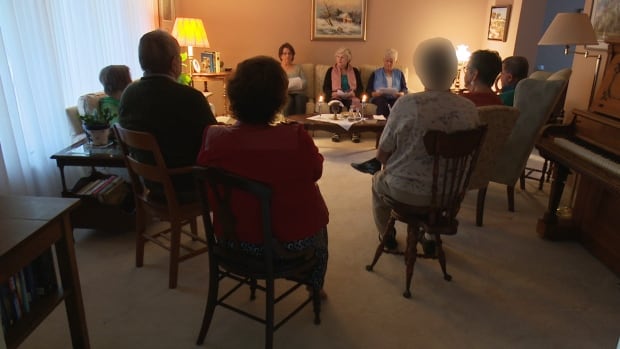 Bouclin leads an underground service in her living room in Sudbury, Ont. One of the parishioners is so worried about possible repercussions from the Catholic church for attending the ceremony, she asked the CBC to blur her head in this image. (Leonardo Palleja/CBC)

Bouclin says she believes the Roman Catholic Church is sexist.

When women in the movement get ordained, they are automatically excommunicated by the Vatican.

Still, Bouclin insists she loves the Catholic Church, as do many of her parishioners. Anita Corriveau, 70, drives almost four hours from Sault Ste. Marie, Ont., to Sudbury to pray with Bouclin.

“I feel like I’m hiding in the house. I don’t want to hide,” says Corriveau. “Open the doors.”

The female priest movement began in Germany in 2002 when a bishop in good standing with the Catholic Church, referred to within the movement as “Bishop X,” ordained seven women in secret.

Having a bishop within the Church perform the ordinations, members of the movement argue, allowed the apostolic succession — the line of bishops stretching back to the time of the apostles — to be preserved.

Bouclin says there are now 182 female priests and 16 bishops in 14 countries across the globe. Canada has 15 women who belong to the movement.

As one of a small number of bishops, it’s Bouclin’s mission to help find suitable candidates and ordain them.

Pat Cook, 70, is one such candidate. Bouclin met her at the ordination of another woman in 2015.

Cook, a retired teacher, says she was exhilarated by the ceremony and soon after began her own journey. She insists that if the priesthood had been an option when she was young, she would have chosen it. 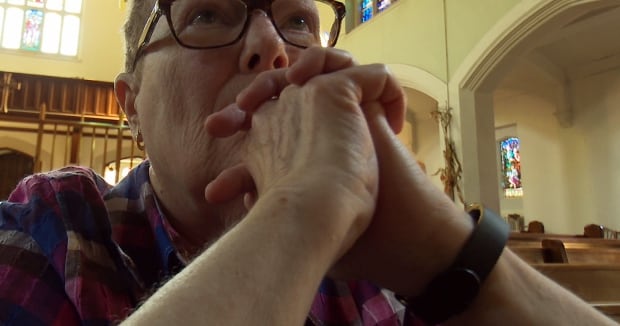 Pat Cook says she would have joined the priesthood as a young woman if it had been an option. (Leonardo Palleja/CBC )

Cook admits to being nervous about her ordination, but mostly, she says, she wants to get it over with so she can help the people in her Toronto community.

“I will follow the rules,” she says. “I just can’t help that I am a female. And I won’t apologize for that.”

A recent New York Times/CBS poll reported that 64 per cent of Catholics in the United States support women’s ordination.

Meanwhile, the Vatican remains opposed to the idea, saying that the ordination of any woman is invalid. At a press conference in November, Pope Francis reiterated the church’s long-held position and hinted that women will never become priests in the Roman Catholic Church. 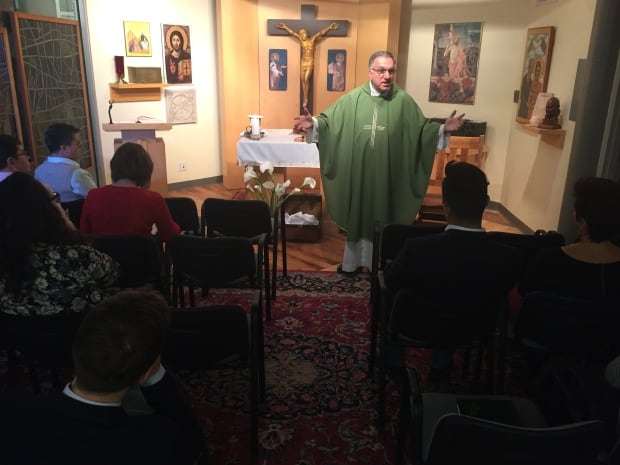 Rev. Thomas Rosica, the English-language press attaché for the Holy See, says rules are rules and if women don’t play by the Church’s rules, they ‘can’t be a full part of it.’ (Nick Purdon/CBC )

Rev. Thomas Rosica is the English-Language press attaché for the Holy See. He admits it can be a challenge for the Church to explain why women can’t be ordained.

“We live in a society where people expect much for the language of equality,” he says.

‘My heart goes out to them, but I am sorry, we have certain rules.’– Thomas Rosica, Holy See press attaché

Rosica stressed that there are many ways that women can contribute to the Church without becoming priests.

“My heart goes out to them,” Rosica said of the women who want to be ordained. “But I am sorry, we have certain rules. As with any organization and corporation, any workplace, [if] you don’t play by the rules, you can’t be a full part of it. But nobody is saying they don’t love Jesus.”

Mid-afternoon on a warm Sunday in November, Cook walks nervously down the centre aisle of a United Church in Toronto that has agreed to host her ordination.

There are about 50 people in attendance, including several members of Cook’s family.

“I am feeling nervous but joyous and blessed,” Cook says. “I just hope I am worthy. It’s the culmination of my life.” 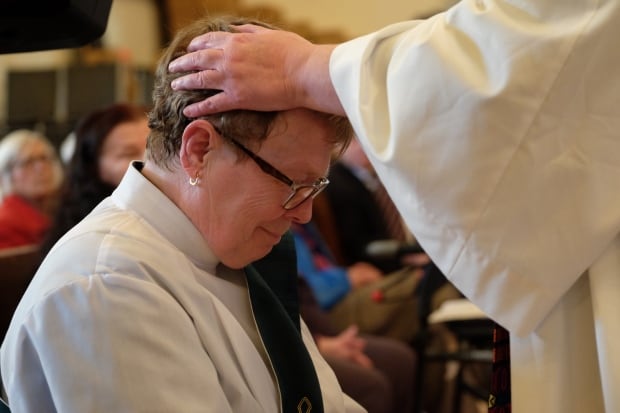 Cook is one of 15 unofficially ordained female priests in Canada, and the only one living and working in Toronto. (Nick Purdon/CBC )

When Bouclin steps up to the podium to officiate the ordination, she can’t resist mixing politics with religion.

“Pope Francis reiterated that there would never be ordained women in the Catholic Church,” Bouclin says. “How disappointing that he should be looking back, backward, and adopted the position of his immediate predecessors.”

Bouclin says she doesn’t care if some Catholics dismiss her and the women she ordains.

“To be honest, I feel sorry for people who are so closed-minded,” she says. “Someone saying ‘You are not a priest. You are not a bishop’ doesn’t take anything away from me. If anything, they’re the losers.”

Bouclin invites Cook to sit in a chair in front of the altar and lays her hands on Cook’s head.

“I ask you, ‘Are you ready to be ordained for priestly ministry in the Church by the laying on of our hands and the gift of the Holy Spirit?'” Bouclin asks.

Cook quietly states that she is.

“I am following who I am,” Cook says after the ceremony. “I am being authentic. I am being me. So, if I hurt people by being a Roman Catholic woman priest, then I am sorry. I don’t want to hurt people at all ever, but I have to do this.”