A Song of Celebration for the Life of Sherry Hornbrook

This is a song of celebration for the life of Sherry Hornbrook ,74,of Fort Myers, Florida who left this earth sheltered in the arms of Love and surrounded by her three beloved pets:  her dogs, beloved  big,shaggy, docile, sweet Annie,15, and Buddy, her little ball of fire and love, with her less than a year, and her very special cat, Tux, with her three years.  The latter two were homeless pets that she opened her life to when I asked for her kindness, bringing them such security and joy. She was in her favorite company. She left quietly and peacefully in her sleep some time in the wee hours of January 19th, 2017 for her forever life with our loving God.

Sherry was a woman of faith though not a regular church goer as her favorite church was St. Michael and All Angels Episcopal Church on Sanibel Island. This was her family’s church for over thirty years after her parents moved there from Michigan. She had recently began to attend Iona Hope Episcopal Church in Fort Myers, closer to her home. Her faith was evident in the way she cared for her animals and for her friends and neighbors. The last I visited with Sherry was about two weeks ago when she brought me boxes of crayons to give to the children that I serve in our Mission church , the Good Shepherd Inclusive Catholic Community.  She also cooked home made chicken noodle soup and her special banana bread for my life and ministry partner, Judy Beaumont as she battles yet another cancer with heavy rounds of chemo. Sherry never “wanted to intrude” but would just deliver her gifts to the door, and we let her know how very thankful we were. We spoke on the phone too as she liked to share how happy she was with the animals that I introduced into her life.This too was a great source of joy for me, as was her feeding of  a few of the many stray kittys we have in our neighborhood.  Sherry loved animals and they responded to her without fear.

On the morning of January 19th, the loud whining sirens from an ambulance and police cars rudely summoned the neighbors to the streets.  The sirens stopped at Sherry’s house where her closest friends,Donna, in tears,and Joe by her side, told the police that she found Sherry in her bed, lifeless. Sue and Luther, her good friends from across the street joined them and I came a little later.  We all held each other and cried as we realized that Sherry was gone. We would not hear her voice again though she dearly loved talking with each of us when she visited or was visited. We all described the feeling of emptiness we had as we looked at the house she loved,and responded to Annie and Buddy bewildered and confused at the fence. (Tux was under the bed and would not emerge). Joe and Donna shared that at first Buddy would not let anyone get close to Sherry’s bed. He was standing next to her,and doing his job of guarding her with all he had to offer in his compact small mixed terrier body. Joe was able to call him outside with Annie. The police officer asked about her relatives and for any knowledge of her health. As far as anyone knew, Sherry had no life threatening illnesses. She did not expect death, although she had let some of us know who would take care of the pets in the event of her passing. She was proud that she had made plans for them.

Her beloved Mother Eleanor Hornbrook, of Sanibel, Florida preceded her in going home to God by a little more than a year (in September of 2015). After working many years at a job she loved at Furniture World she retired and her recent life had been devoted to the care of her mother and her wonderful and vital pet family and with visiting her sister, Cynthia, who was in a rehab facility. She spoke frequently on the phone with her dear sister, Peggy Hornbrook Mulligan in Michigan and referred to her in conversation as if she lived here too.  She also thoroughly enjoyed getting to know her grand-niece Sarah and Sarah’s wife, Rachel who now lived nearby and Sarah’s children. She had Thanksgiving with them and was thrilled by this. It was moving to see the love and respect Sarah and Rachel had for this newly found grand-Aunt as they assumed the care of her beloved pets.  Her best friends were neighbors Joe and Donna Grohal. Joe, whom she knew for over twenty years, helped her with her grounds and did many tasks for her and she was so grateful to him. Joe and Donna shared holidays with her and the ups and downs of their lives.  She had had a great Christmas with them.  Joe shared that he and Sherry had coffee together the morning of the 18th and she was full of life and interest in all he was doing.  We each regretted the times we could have visited her but got caught up with our own lives. And yet we recognized that we are all a part of each other’s lives. She was a gentle and caring woman who loved her home and her pets and her yard, especially the beautiful big trees in the yard. She built a wonderful large and safe enclosure so the dogs could run and play in the yard and so Tux could eat grass now that he became an indoor cat.  Then, it seemed to us in the midst of life, she was suddenly gone.

Another neighbor, Lorna Kibbe joined us as we stood there remembering Sherry. She did not know Sherry well, but cared deeply that our neighbor was gone. I asked if the little group of neighbors and friends would like to pray together and the strong response was “yes, please” We held hands and stood in a circle and prayed for Sherry and her family of pets and people, and for each of us there who would miss her. Of different Christian denominations and faiths we joined in the faith of her eternal life with our loving God and in being so very thankful for the life she led among us.

Neither….death, nor life nor…. present things,nor future things…nor any other creature will be able to separate us from the love of God in Christ Jesus our Lord” (Romans 8:37-39)

“Precious in the sight of the Lord, is the death of his faithful ones” Psalm 116:15

And precious to us forever is Sherry Hornbrook, who made 74 years on this earth and lives on in eternity. We are so blessed to be her neighbors  and friends.

These are some pictures of Sherry taken in December of 2013 when I brought her cat Tux to live with her: 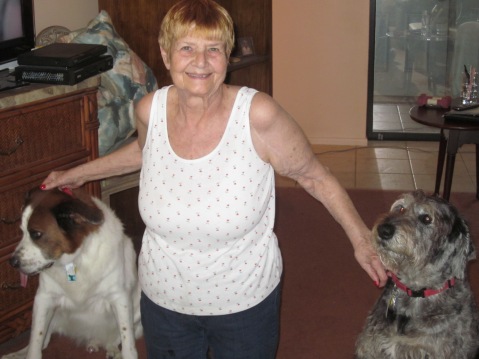 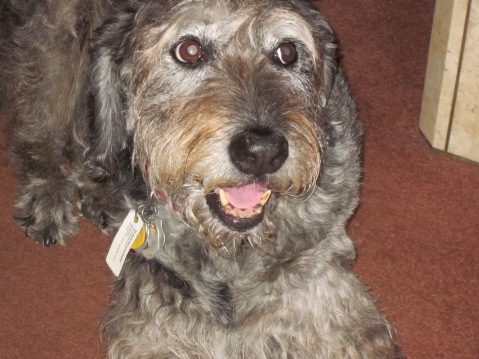 A great joy this week was placing Tuxedo in a new home. This is a kitty who has been visiting me for a few months. He was terrified of human contact and would literally run so fast that he would disappear when we first met. In the past few weeks he became very friendly and did all he could to beg his way inside. I was so blessed to have a neighbor, Sherry Hornbrook who was willing to adopt him. He went to the Vet on Monday and was neutered and got all of his shots. He had to stay a little longer as there was a complication with his neutering and he had a pre cancerous condition that was so much better removed! He did very well with all of this and charmed everyone at Dr. Terry Sutton’s Three Oaks Animal Hospital.  He was so ready for a home. On Friday Sherry picked him up and it was mutual love right away. He is adjusting to two older dogs who are very patient with him as they had a cat sibling before. What a lucky kitty to have such a loving family now. We are very thankful. (One of the beloved older dogs, Freckles, passed away in the next year or so and after a while there was room in Sherry’s heart for another little dog. ) 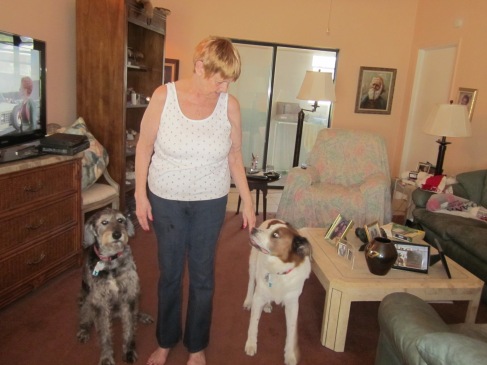 This (below) is the little dog that Sherry accepted into her family last March. She renamed him Buddy because he became her special buddy and a buddy to Annie and Tux. (Buddy is with Pat Scorsone here who helped me bring him to Sherry. Pat had cared for him after he lost his home and had been hit by a car. Sherry told Pat that she could visit Buddy any time but Pat was just so pleased that he would have a home and big yard with Sherry.

Below this is  Sherry (in the middle) with Sue Davis and myself out for lunch, Judy Beaumont is taking the picture. 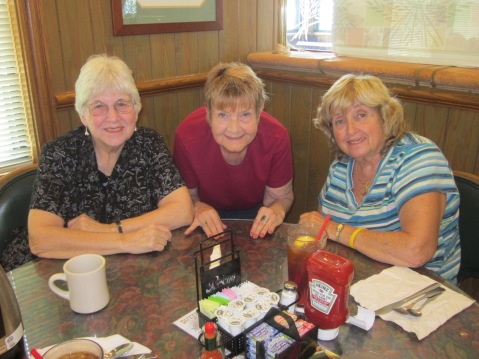 And here the words of poet William Wordsworth also fit:

“she lived unknown, and few could know,

when Lucy ceased to be….

But O, the difference to me”  And to all of her neighbors , friends and family four and two-legged.

REST IN PEACE DEAR SHERRY, you are our angel on Eastshore Drive now!

With love and blessings,