Today we look at the promises of our God that lead to blessing and transformation and the faith that is necessary to claim them. Faith by definition is a step out into the unknown, the uncertain. It is not the territory of the known or the easily explainable. Sometimes these days we  worry too much about what we can never know-like exactly what happened eons ago as told in  Scriptural passages. With all of our scientific knowledge we seek rational explanations for everything as if we need to know for sure before we step. But life is full of times when we must step out without knowing.

This week Pastor Judy Beaumont is starting a new and experimental cancer treatment. What she had before was very hard on her but it was working, although its history is such that it could stop  being effective at any moment. She is a woman of very strong faith. As I accompany her on this journey sometimes I am more afraid and worried than she is. After much prayer and underpinned by the prayers of many she decided to step forth on faith to take this new treatment. Thus far,all goes well with this. It is a gentler treatment but will it be effective? Its gentleness is a partial miracle,  with effectiveness it would be quite a miracle, and that is what we have been praying for. It is a step into completely unknown territory with great hopes, not unlike the hopes of Abram and Sarai as they stepped out on faith to a new land. Or the trust of Jesus as he stepped forth toward the Passion and Resurrection. Or to the disciples as they coped with the journey that was set before them in the Gospel of the day (Matthew 17:1-9)-to keep on believing in Jesus, in the fullness of who he is, and do what he asked of them no matter what was ahead.

In Genesis 12:1-4 we see God asking Abram to leave all he knows, to move from the land of his kinfolk, and make a journey into a new land that God would show him. God promises that he would become the father of nations even though his wife was barren. While Abram was part of a people that moved around, this was a lot to ask for-in so many ways it was farther than he could ever envision and he was already 75 years old. We can just hear his wife Sarai saying, move where? Why? (And,well she might fear if she knew what part of the journey would have in store for her!)  Yet Abram had faith that was strong enough to propel his journey and he and sarai and his extended family left the known for the completely unknown. . And he was thereby eventually transformed to Abraham and Sarai to Sarah -the father and mother of the people of God.

In the Psalm of the day (Psalm 33) we are told to place our trust in God who loves justice and right. (So if this is what God loves this is what we must do leaning on our faith and we are both blessed and transformed for doing it. Pastor Judy B and I see our Good Shepherd ministry as both transformative for us and those we serve, and blessing in our lives).We are told that God’s eyes are upon those who “hope for God’s kindness to deliver them from death and preserve them in spite of famine “( Or anything else).  In the picture below Roger ,who was among the first to join our ministry to the homeless in 2007, is blessing our new Priest Rvda. Maria Elena. Roger told us later how happy he was  to come and to bless her and worship with us once again because we changed his life. We told him that it was God who changed his life and he agreed,reminding us that he was living in the streets for three years when we met him and was unable to find a way to housing. He was the first one who asked us to pray for him in the street ministry. He then started to spend nights on his knees praying. When we finally helped him to claim his Veterans medical services and SSI income in 2008 and 2009 and to obtain Goodwill housing for the physically disabled he could not believe the miracle of his answered prayers. He has remained with our Good Shepherd Inclusive Catholic Church for ten years, making his Confirmation in 2014. He  always brought an offering of love to church from his small income in a large white envelope. He gave that to us once again at the Ordination and we assured him it would help someone else. Roger took a leap of faith and his life was truly transformed. There is life and joy where there was sadness and despair. And his story is multiplied a hundred fold and more. Thanks be to God! 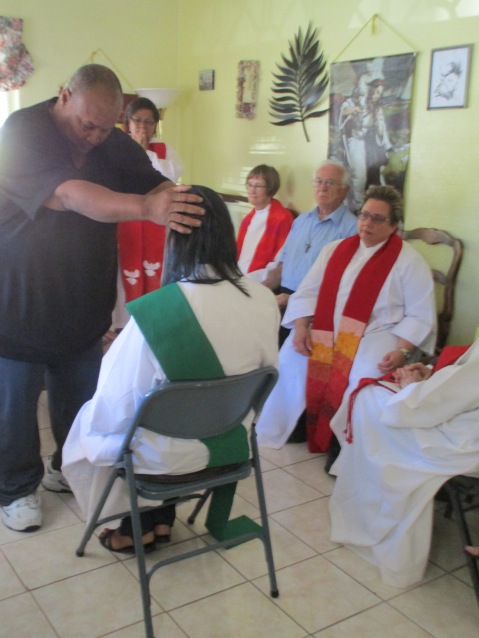 And so too with faith Abram and Sarai were both transformed and delivered.And so Jesus who prayed on the mountain with three of his disciples before his  violent death by crucifixion was ultimately transformed through his miraculous resurrection shattering the finality of death for all of us. On that mountain with disciples as scared witnesses he was also transformed/transfigured before them in a vision that they shared. The blessings of his Father given at his baptism-you please Me my Son- flowed over him once again. And, as the Eucharistic Preface of the day says: “For after he had told the disciples of his coming death,on the holy mountain he manifested to them his glory,to show,even by the testimony of the law and the prophets,that the Passion leads to the glory of the Resurrection….”

May we be blessed with life and transformed as we step out on faith and risk what is “unriskable” without it-our very lives- for the realization of the reign of God in love , compassion and justice for everyone.

And now for Dr. Beverly Bingle, RCWP on Transfiguration

Thanks be to God!