Here we share this thoughtful commentary by New Ways Ministry’s Francis DeBernardo (Bondings 2.0) on a letter by Pope Francis giving his blessing to the adopted family of a married gay couple in Brazil. Congratulations and blessings to the Reis-Harrad family!

In the picture below are Fr. Roy Bourgeois and Roman Catholic Woman Priest Janice Sevre-Dusynska speaking truth to power at a rally. Here Fr. Roy is standing for compassion to the LGBTQ community, and for women in the priesthood. Fr. Roy a former Maryknoll priest is a lifelong witness and fighter for justice and peace. His inclusion of accepting women priests in the RC Church as one of his concerns has earned him excommunication from the Church but never from the love of Christ. His active witness continues. Readers might be interested in his book: My Journey from Silence to Solidarity Edited by Margaret Knapke, 2012, Published by fxBEAR Yellow Springs, Ohio- online see: http://www.roybourgeoisjourney.org

Here is the concluding line of a letter Fr. Roy wrote to Pope John Paul ll in 1995: “….Jesus was a person of compassion. He went about healing the suffering of others and excluded no one. I pray that you, as our Pope, will have the courage to follow in his footsteps. I appeal to you to please change these policies which are causing so much needless suffering and division in our Church today…”
Fr. Roy also said: “And lastly,whatI do know is that the ordination of women in the Catholic Church is inevitable, because it is rooted in love, justice and equality”. Amen and thank you, Fr. Roy. 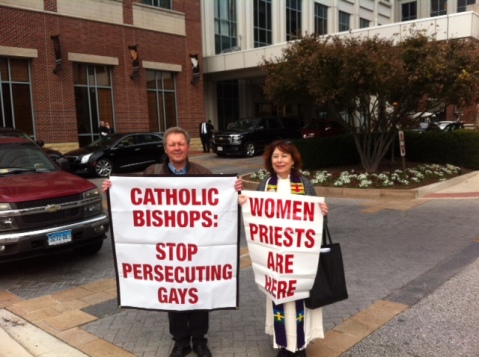 From Bondings 2.0:
Pope Congratulates, Blesses Gay Couple on the Baptism of Their Adopted Children
by Francis DeBernardo, Editor
Pope Francis, through an aide, has sent his congratulations and apostolic blessing to a legally married Brazilian gay couple on the occasion of the baptism of their three adopted children.

david-toni-reis-arquivo-pessoal
The Reis-Harrad family with the parish priest after the three children’s baptism.

According to Business Monkey News (the only immediately available English language news story), Toni Reis and David Harrad received a letter from Monsignor Paolo Borgia, advisor to the Secretary of State Vatican, which read in part:

“Pope Francisco wishes you congratulations, calling for his family abundance of divine graces, to live constantly and faithfully the condition of Christians.”

The couple, who were married in 2011, and they adopted three children–Alyson, Jessica, Felipe–between 2012 and 2014. They wrote to the pope in the spring of 2017, informing him of the upcoming baptism of their children, who are now young teens. They live in the city of Curitiba in Brazil’s Paraná state.

Reis posted a photo of the letter on his Facebook page.

Pope Francis knows the impact that his messages, even personal ones for private occasions, will have around the world. He is savvy enough, based on his history of making headlines with LGBT-positive statements, to know that his gesture would be made public.

The way I see it, Pope Francis is giving a clear message to bishops, priests, and pastoral ministers around the world about how they should treat families headed by gay and lesbian couples. His message is “welcome and bless.”

I am not under any illusion that Pope Francis approves, theologically, of same-gender marriages. Indeed, he has publicly opposed laws intended to spread marriage equality.

But, he has consistently promoted a positive pastoral response to LGBT people and their families. He seems to recognize that there is a difference between political reality and personal reality, and he is courageous enough to respond positively to the personal reality, even if it conflicts with his political ideas.

Our bishops need to follow his example. Of course, the first to come to mind is Bishop Thomas Paprocki of Springfield, Illinois, who made headlines last month because of his draconian barring of married lesbian and gay people from most of parish life. As we’ve noted before, Bishop Paprocki could learn from Bishop Patrick McGrath of San Jose, California, who instructed his priests to not “not refuse sacraments or Christian Burial to anyone who requests them in good faith.”

The words of Toni Reis should ring in the ears of bishops and LGBT people around the world:

“It is a great advance for an institution that burned gays burned during the Inquisition and now sends us an official letter congratulating our family. I am very happy, as I can die in peace.”