This is an article by Patsy McGarry from today’s The Irish Times that features Rev. Dr. Bridget Mary Meehan, ARCWP Bishop, as she spreads word of the RCWP Movement in Ireland.

The pictures below show Bishop Bridget Mary leading in activism and also when confirming members of the Good Shepherd Inclusive Catholic Community in Sarasota, Florida in 2012. 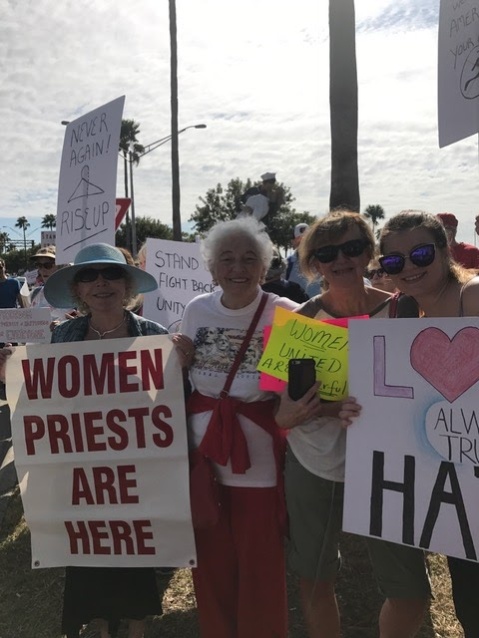 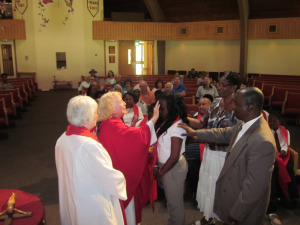 Five women who believe they have a vocation to the Catholic priesthood have contacted a US delegation visiting Ireland this month to recruit female priests.

From the US-based Association of Roman Catholic Women Priests (ARCWP), the delegation is being led by Irish-born Bishop Mary Bridget Meehan, who is accompanied by Rev Mary Theresa Streck and Rev Joan Chesterfield.

Speaking of the five women seeking ordination, Bishop Meehan told The Irish Times they “already have theology degrees and diplomas in spirituality”.

A Mass celebrated by Bishop Meehan, in a community centre on Dublin’s South Circular, was attended by “35 to 40” people earlier this month, while the delegation met a similar number more recently in Drogheda.

They have also visited Glenstal Abbey at Murroe, Co Limerick, where they met former Abbot Mark Patrick Hederman and Nóirín Ní Riain who was ordained Rev Nóirín Ní Riain, minister in the One Spirit Inter Faith Seminary Foundation, last month. The foundation embraces “the universal truth at the heart of all spiritual traditions”. Ms Ní Riain has a doctorate in theology.

Bishop Meehan said she had also met Limerick parish priest Fr Roy Donovan who last week called for the ordination of women to the Catholic priesthood and objected to the introduction of a male-only permanent diaconate in his Cashel Archdiocese before completion of a report by the papal commission on women deacons.

The meeting with Fr Donovan was “very open” she said, and he had put her in contact with a woman who believes she too has a vocation.

Bishop Bridget Mary Meehan was raised to the episcopacy in 2009 at Santa Barbara, California, after ordination to the Catholic priesthood at Pittsburgh in 2006.

Her family is from Crosskerry, near Rathdowney, Co Laois, but they left Ireland for the US in 1956. Nowadays, she holds weekly liturgies , including Mass, at the Mary Mother of Jesus Inclusive Catholic Community in Sarasota, Florida.

In North America, there were about 250 Catholic women priests and 11 women bishops, Bishop Meehan said. Their ordinations were valid “because of our apostolic succession within the Roman Catholic Church”, she said.

This is so because “the principal consecrating Roman Catholic male bishop who ordained our first women bishops is a bishop with apostolic succession within the Roman Catholic Church in communion with the Pope. Therefore, our bishops validly ordain deacons, priests and bishops.”

As well as in the US and Canada, the ARCWP has members in Latin America and, increasingly, in the rest of the world.

They seek equality for women in the church at all levels, including at decision-making and ordination levels, and prepare and ordain qualified women (and men) to serve as Catholic priests. Theirs is “a renewal movement” within the church which aims at “full equality for all within” as “a matter of justice and faithfulness to the Gospel”, she said.

Bishop Meehan points out that their model of church “is exactly the opposite” of the current Roman model. For instance, “our bishops have absolutely no authority apart from ordaining [others to priesthood/episcopacy]. It’s like the monastic model,” she said.

She and other members of her delegation are back in Ireland (she has been a regular visitor over the years) “for the month of August” and hope to encourage other women towards ordination while here. They will be “celebrating liturgies and meeting with women’s groups”.

They would also “love a dialogue with the bishops” in Ireland and believe there is “a new spirit in the church” since the election of Pope Francis in 2013. They feel “in harmony with a lot of what Pope Francis is saying”….”

Note: For more information on RCWP and women in the priesthood you may contact:
rcwp.org and arcwp.org