It is with great joy that we report that Dianne Willman, 44, was ordained a Roman Catholic Priest on 1/19/2019 in Klipkerk at Mosaiek, Fairland, Johannesburg, South Africa at 2PM South African time. Bishop Patricia Fresen of Roman Catholic WomenPriests (International RCWP) was the ordaining bishop.The sacred ordination following traditional form was attended by loved ones and supporters filled with the Spirit and happiness for her and for the Roman Catholic Church sorely in need of renewal and new servant leadership. Rev.Caryl Conroy Johnson of the USA, Eastern Region of RCWP also attended the holy Mass. The Mass of Holy Orders is essentially traditional except that the ordinand prostrates herself before the altar and not before the bishop. 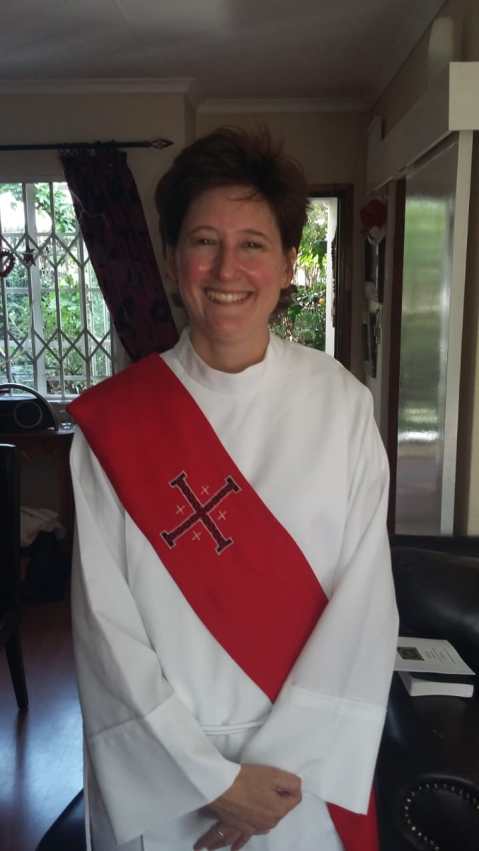 Dianne’s ordination to the priesthood fulfills a call that Dianne first experienced as a child attending Catholic School near Durban, South Africa. Before university studies Dianne spent a year of discernment within a religious congregation, the Missionary Sisters of the Precious Blood. Although life with this Order drew her, her passion for social justice that is lived in the world was the stronger call. She completed her undergraduate degree at the University of Natal and her Masters Degree in Law at the University of the Witwatersrand. She is currently completing the final stages of a Masters degree in Philosophy/Theology/Spirituality and is undergoing training as a Spiritual Director.

She has worked for 20 years in various legal capacities. During 2012 she served for four months as legal aide to the Holy See’s Permanent Observer Mission to the United Nations. She participated in the UN Commission on the Status of Women dedicated ato the empowerment of women and the promotion of gender equality. This opportunity deepened her insights in the connections between religion and gender. Dianne is amember of Catholic reform groups like We Are All Church, South Africa. She is also a retreat facilitator and serves on the Board of an integrated spirituality Center known as Bohareng.

A defining moment regarding the priesthood came to Dianne while on a pilgrimage to Israel in 2004. As she walked where Jesus walked she affirmed her call to priesthood. She knew she would fulfill the call when the time was right and purchased her stole , chalice and paten in trust and anticipation. After completing the program of discernment and preparation with RCWP she was ready to answer the call with “with God’s help I am ready”. Her intimate love for Christ and God’s people will now include her continued fight for the dignity, respect and equality of all people and sacramental ministry. Her courage to do this contra legem but with valid Holy Orders guides her every action. Although the personal cost of answering the call is high, on a broader level Dianne strongly believes that the need for action to usher in a new era of the Spirit is higher, where it can be seen that women can represent the image of Christ and all are welcome at the Table. Having experienced life in a country that suffered under the oppressive laws of Apartheid, serving as a lawyer, and loving a church that forbid her priestly participation Dianne is willing to transgress Canon Law because, like the laws of Apartheid, it is unjust law. She believes that such law cannot in good conscience be justifiably obeyed. She stands willing and able to serve God’s holy people, all of them, as a Roman Catholic Priest.

Congratulations Reverend Dianne and thanks be to God!