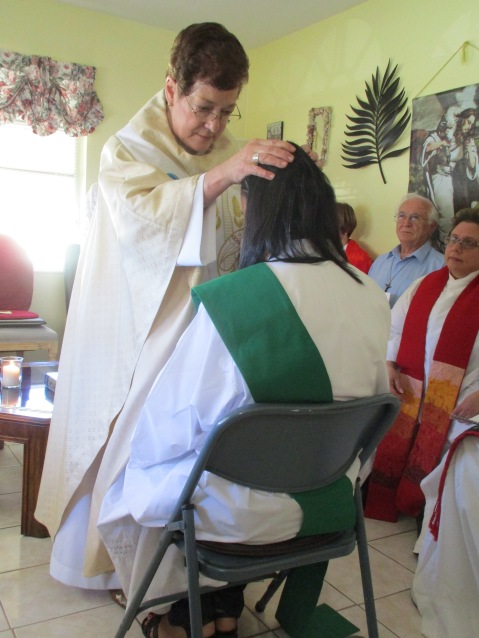 On Saturday February 25, 2017 the faithful of many cultures, races and walks of life gathered as  Maria Elena Sierra Sanchez of Cali, Colombia was ordained a Roman Catholic Priest by Bishop Andrea Johnson of Roman Catholic Women Priests-USA-East in Fort Myers, Florida. She was welcomed as a Priest with loud applause and much joy. Ann Palmer, 87 a lifelong ,cradle, Catholic who recently had eye surgery making walking difficult, struggled to come forward and bless our new Priest, later saying how glad she was to live to see this ordination.

The Mass was in English and Spanish and all participated in saying Jesus’ prayer in Spanish as they held hands.  Rev.Caryl Conroy Johnson of Pennsylvania participated as International Program Coordinator,  while her mentor Rev.Dr. Judy Lee presented her along with her dear  Colombian friend and colleague, Rvda. Marina Teresa Sanchez Mejia. Assisting as well were Rev. Judy Beaumont co-Pastor of the host community, Rev. Maryrose Petrizzo, also on the Program Team and Rev. Judith McKloskey of Kansas City, Missouri who was our Minister of Music along with Hank Tessandori of the church of the Good Shepherd where the Ordination took place.

In the pictures below Maria Elena is prostrating , surrendering her life to God in Priestly service in the Roman Catholic Church and, after the Bishop blesses the new priest , the people give their blessings. 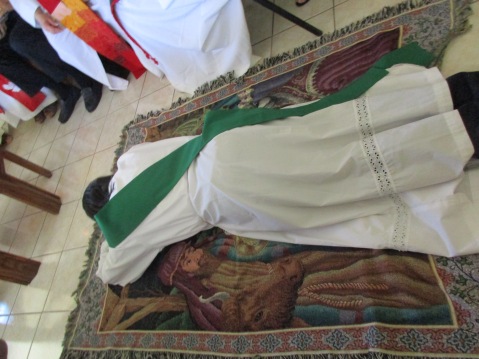 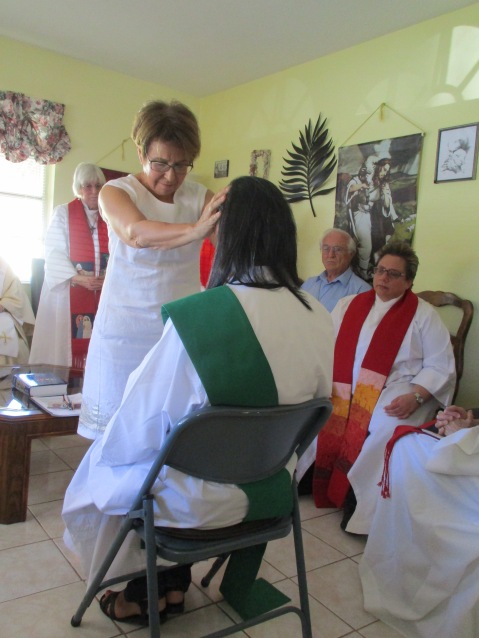 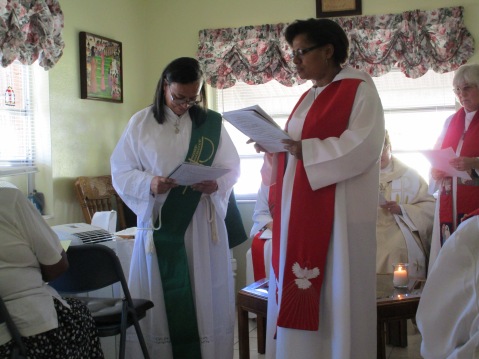 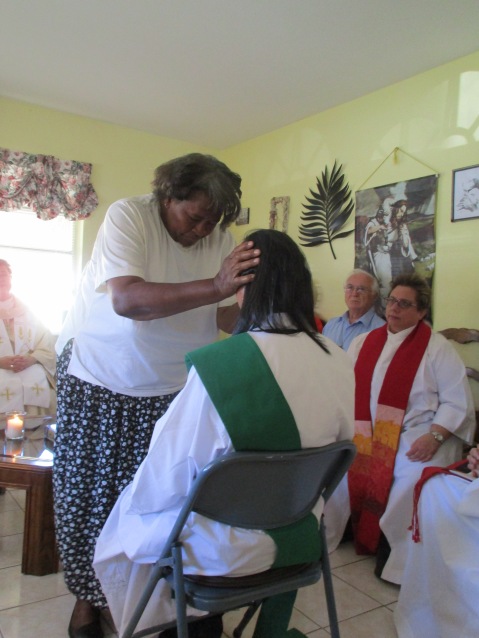 All who participated in a process that took two days in which a variety of community members in Estero and Fort Myers welcomed Rev. Maria Elena Sanchez Mejia to the priesthood were moved by her humility and courage. On Friday 2/24/17 Ellen and Jack McNally ,leaders in Call To Action of Southwest Florida hosted us at their home. As we broke bread with Maria Elena we also learned of her life as a peacemaker in a poor area of Cali where she is also a Elementary School Principal and pastoral counselor. 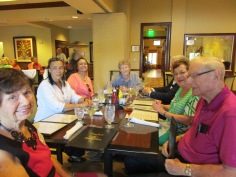 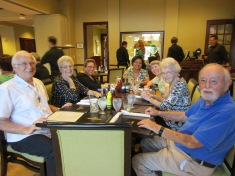 This is our summary of why Maria Elena Sierra Sanchez will make an excellent priest, with the help of God’s Holy Spirit:

Maria Elena Sierra Sanchez is a 51 year old former Vincentian Sister who has carefully discerned her call to be a priest. She was with the Vincentian Sisters from age 16 until 1997 when she left to assist her family and also then faced her own serious illness. Her father was handicapped, blind from birth and had a trade that was no longer needed by 1997. He also was grieving the loss of his wife, her mother, who died of cancer.  So Maria Elena was dispensed of her vows and went home to care for them.

Her formal degrees obtained while she was a religious sister ( her Licentiate) are in Primary Education and the assessment of children and youth. She also has an advanced degree in technology. She has done extensive mission work in the poorest communities rural and urban and always worked with youth and families. Her theological and liturgical formation was with the Vincentians in the beginning (her vows after formation were at age 23) and at various times over sixteen years of vowed religious service.

In 2007, she also was ordained as a priest in the Fraternidad de la Eucaristia, a movement founded by two ex Salesian RC priests in the Apostolic Catholic tradition. She received theological training and formation from Fr. Alfonso Cabrera and Fr. Dario Soto of the Fraternidad. Fr. Soto is respected as a renowned theologian. Maria Elena was an  active and devoted priest with full communities in Cali.  Maria Elena,along with other women from Cali learned about Roman Catholic Women Priests in 2012. In 2013 she  applied to discern with RCWP but her process was slowed down by a diagnosis of advanced LUPUS and later a need for surgery. She also was burdened with the care of her father and concern for her young niece, Laurita, the latter of whom later died tragically of   Leukemia. During this difficult time she continued with her ministry in her community serving 40-50 community members and meeting with groups for prayer services at their homes. 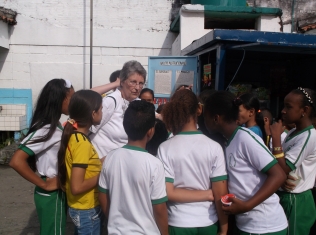 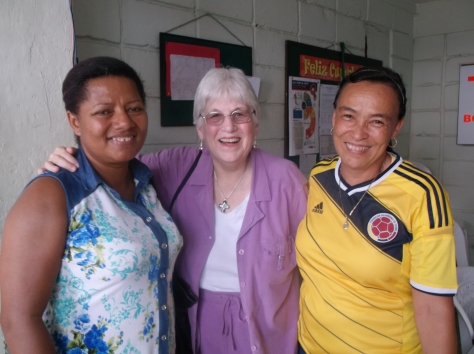 In Maria Elena’s discernment she reflected much on our priestly healing roles in the community of the faithful. She described praying with the elderly, the sick and the dying and those in need of reconciliation including a moving description of a youth who was shot in the violent warfare in Colombia. She was nearby and ran to his side. He was so thankful that she was with him praying for and with him as he lost his young life. She noted that she was blessed with the capacity to listen and to put herself in the shoes of others, no matter who they are or what kind of lives they led. She also described the three month vigil with her own mother as her life ebbed away. They would sing and recite scriptures and the rosary together and it was almost as if her mother was lifted to heaven as they prayed. 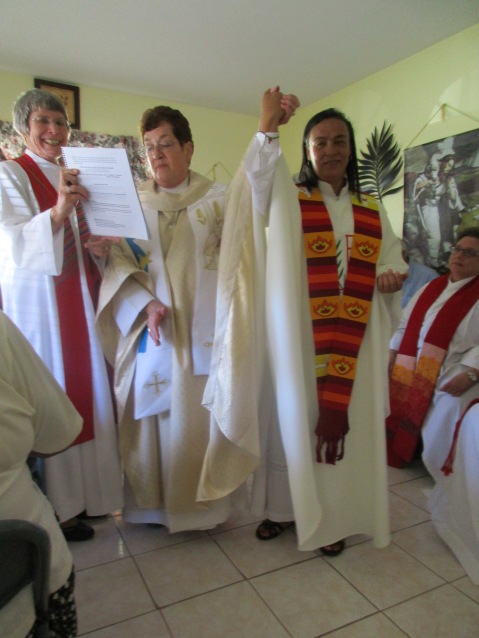 Above, Maria Elena is welcomed as Priest

As a Grammar school Principal she is on the front lines in the violence experienced in her poor community. In the Litany of Saints she listed three children under the age of seven who died violently. Her way is to live and teach love and peace. Her school, that we visited in 6/15, was indeed a testament to love, peace, and joy. Beyond being the Principal she is accepted by the children and their parents as the Pastor they turn to at school and in their lives. That very day a mother sought her pastoral counsel. Maria Elena is a priest called forth by her people and she will continue to be a tireless servant priest in her community.  We are blessed to welcome her to RCWP. 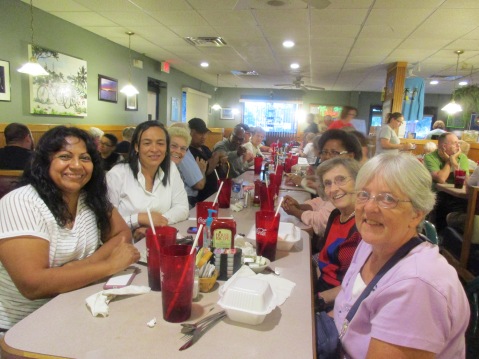 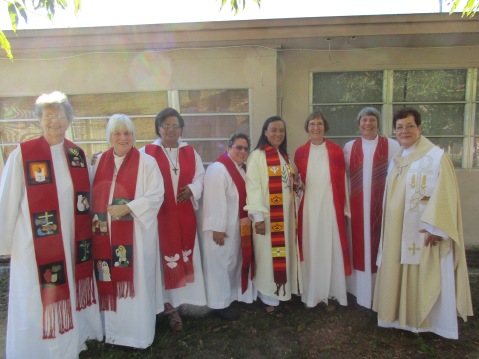 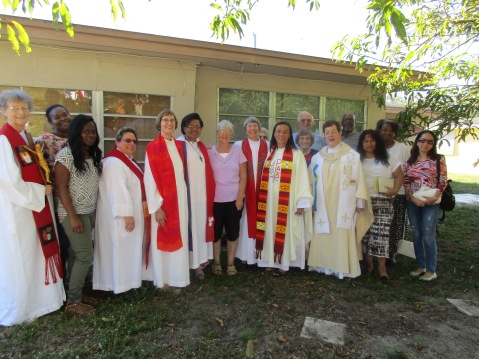